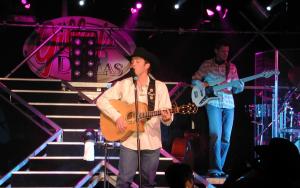 Clay Walker is known as an American country singer. He is most famous for his platinum hit single, “What's It to You”.

Ernest Clayton Walker Jr was born on August 19, 1969 in Beaumont, Texas. He is the son of Ernest and Danna Walker. He grew up in Vidor, a city in western Orange County, Texas. He is the oldest of five children. Although the family comprised of a large number of members, Clay was the only one to show a natural gift towards music. At the age of 9, his father bought him his first guitar, and at the age of 15, he started entering music competitions.

As a teenager, he was employed as a night time desk clerk at a Super Eight Motel but he quit his job when he had one of his songs played on a local radio station. The morning disc jockey said it was “too good to pass up” so he played it even though playing self-submitted tapes was prohibited according to the station’s policy. Upon graduation from the Vidor High School in 1986, Clay started working at the Goodyear Tire firm

Clay Walker has stated more than once that James Taylor is one of his greatest inspirations. He said that he learned a great deal about country music from Tayor who he never forgets to mention as his hero and mentor.

After graduating from high school, Walker wanted to try his best in pursuing his vision of becoming a country music superstar. He created a day planner and planned the steps he would take over the following five years.

In 2003, Clay Walker divorced his wife Lori Walker. Clay and Lori drifted from each other and Clay stated that he just was not able to do more for Lori. Clay and Lori had a lot of fights and Clay began to keep himself away from her. Clay finally understood that he could not bear her and filed for a divorce. They ended up with two children together named Skylor and McClay.

In 2007, Clay married Jessica Craig and had a son together named Elijah. Jessica had two kids named William and Mary from her previous marriage.

FAQ: How old is Clay Walker?