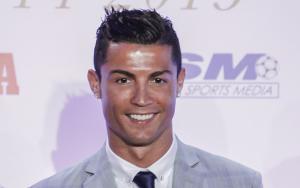 Cristiano Ronaldo was born as Cristiano Ronaldo dos Santos Aveiro on 5 February 1985 in Madeira, Portugal. His father was a gardener and his mother was a cook. He gave Ronaldo the name because he liked Ronald Reagan. Ronaldo has often talked about his upbringing and the poverty that he had to endure. The first club that he played for was Andorinha later moving to Nacional. When he was just 12 years old he was signed by Sporting CP. He left his education in order to pursue his career in football.

When he was just 16 years old he was promoted to the senior team at Sporting CP. In a match between Sporting and Manchester United he was observed by the then Manchester United manager Sir Alex Ferguson who was so impressed by Ronaldo that he signed him in few days. In 2003 he became a Manchester United player after a transfer that cost around $17 million. He was at that time the most expensive teenage player in the English Premier League.

He started his Manchester United career on a high as he was given the jersey number 7. He became a very influential player in the team and developed speed and strength which improved his gameplay. He was very close to the coach Alex Ferguson and regarded him as his father. His Manchester United career went very well and he became one of the best players at that time.He left the club in 2009 and joined Real Madrid for a world record fee of $90 million. He was so good at Manchester United that he won all the three awards that are given by the PFA. He helped Manchester United win the league as well as the champions league.

When he went to Real Madrid he turned into the very best player on the planet but there was another little magician that was as good if not better than him, Lionel Messi. Messi has been playing for Barcelona since he was 11 years old. He has a cult following in the world and there are comparisons made wherever these two players play. At Real Madrid, he has led them to League win on many occasions as well as to La Decima which is the Spanish term for 10 teams as the club has won 10 Champions league trophies throughout the history. He has had an illustrious career for his country as well. He won the EURO CUP in 2016 with Portugal , the one country had never won before.

Currently, he is playing very well and is expected to lay for half a decade more before thinking about retirement. He isn't married right now. He had a child with his former partner after which he had a girlfriend Irina Shayk. They, however, split up and now he's dating Georgina Rodriguez. He has played with 3 international club teams until now and isn't expected to move to another club in near future. His net worth is expected to be around $300 million that he earned through football and advertisements.

FAQ: How old is Cristiano Ronaldo?

FAQ: What is Cristiano Ronaldo networth in 2020?