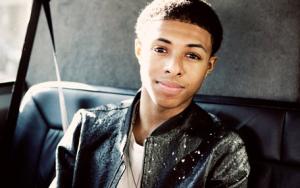 Daniel Dwayne Simmons III, mostly known by the name of Diggy Simmons is an American rapper and actor who shot to fame after appearing in the reality show Run’s House, being the youngest of his five siblings in his family, which was the main cast of the show. Although, he is just 19, he has reportedly been in 2 relationships already.

While his professional life has been a smooth ride so far, his personal life has been the contrary being full of controversies. The young age being a major factor for immaturity and the stardom being another, one can’t really expect a kid with such fame to keep quite at his home and play video games! His first known girlfriend was reportedly a girl named Destiny Thompson whose name hasn’t really done rounds anywhere on the web or television.

Destiny is also of the same age as Diggy and his closeness with her possibly started in September 2010 and eventually continued to do the rounds for quite some time. The girl was reportedly also a singer and actor and their matching professions might have done the trick in their getting hooked-up. She has also featured in one or two television shows but those mostly went unnoticed. The affair though ended as quickly as it started as rumors surfaced about Diggy’s closeness to other girls given his profession and social status.

At the age of 16 during 2011, gossip websites were full of rumors about Diggy’s hook-up with teen model and singer, Jessica Jarrell, who supposedly got in touch with him through mutual family sources making the gossip makers even more suspicious before being brushed off by Diggy, in a certain interview, where he talked or rather opened up honestly about his professional life and how he didn’t want to brush off his family fame to make a successful career as a rapper. He also talked at length about rumors about his relationship with Jessica and clearly stated it as being a best-friend one than anything else.

After that though, the rumors came out to be quite true as both were seen together extensively at various places and their proximity was closely followed by the paparazzi. Posing for pictures together and posting them on his twitter fan account only confirmed the case. Rumors about their possible engagement and their lips meeting in public was the talk of the town for quite some time during the early part of 2012 and were even rumored to have planned of a marriage the next year. To make matters worse, news even came out in certain websites in March 2012 that Jessica had become pregnant with Diggy Simmons’ child! Diggy Simmons though, came out this time to blast off all such rumors and said there hadn’t been any engagement. Reporters soon got real news to catch as their relationship suddenly came to an abrupt end.

Diggy hasn’t had any public scandal as yet and managed to keep himself clean, that way so far. Presumably, jokes were thrown every now and then about their break-up on social networks, some even saying that they got a divorce, before getting married!

FAQ: How old is Diggy Simmons?

FAQ: What is Diggy Simmons networth in 2020?