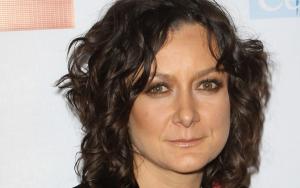 Sara Gilbert was born as Sara Rebecca Abeles in 1975. Sara is an American actress and is best known for the role she played as Darlene Conner in the ABC hit sitcom “Roseanne” from 1988 through 1997. Sara changed her last name from Abeles to Gilbert, taking the last of her mother’s first husband. Sara is a currently the creator and a co-host of a daily daytime talk show called “The Talk”.  Sara also currently plays a recurring role on “The Big Bang Theory”, a hit sitcom on CBS, where she plays the character of Leslie Winkle.

Born in Santa Monica, California, Sara’s mother is Barbara Cowan and her father is Harold Abeles. She has two siblings, a brother named Jonathan Gilbert and a sister named Melissa Gilbert. Melissa played the lead character, Laura Ingells, on the television series “Little House on the Prairie”. Sara dreamed about becoming an actress from the age of six, when her older sister Melissa received her plaque on the Hollywood Walk of Fame, also known as the Hollywood Star. Sara’s first attempt at acting was when she appeared in a Kool Aid commercial. Later, Sara appeared in different made for television movies. In 1988, when she was only thirteen, Sara got the role of Darlene Conner, the sarcastic middle child, in the hit ABC network show “Roseanne”.  Sara was a member of the cast for nine years from 1988 until 1997 at which the series ended. Sara also wrote one of the storylines in the fourth season, with the writer’s guild writing the teleplay to the episode titled “Don’t Make Me Over”.

Sara’s character on the “Roseanne” show was considered to be of high importance, so the producers scheduled the shootings so that Sara would have enough time to complete her studies at Yale University. Scenes that could be shot on a local soundstage were scheduled in New York instead of Los Angeles so that Sara would not have to travel across the country. Her other appearances include having voice work on “The Simpsons”, and acting on “24”, “Will & Grace”, “Law & Order”: “Special Victims Unit” and “Private Practice”. On the television show “ER”, Sara played the role of another sarcastic character, Jane Figler, from seasons eleven to thirteen. Sara also went back to comedic television when she appeared on the show, for one season only, on the WB network show “Twins: Another show that was ended in short time with her as a character was “The Class”, where she played a character named Fern Velch.

A few years later in 2007, she got a role on the vastly popular television comedy “The Big Bang Theory” as Leslie Winkle, who was a friend of Johnny Galecki’s character on the show named “Leonard”. Galecki had also played her boyfriend in her previous “Roseanne” series stint. In the second season of “The Big Bang Theory”, Sara was made a main cast member and the love interest of Johnny Galecki’s character in the show. A few years later in 2009, her character role became difficult to write for, and so it was reduced to a re-occurring role. The Winkle character was gradually removed as other female characters on the show gained more prominence in the show’s storyline.

Sara is currently a co-host and executive producer of the television show “The Talk”, a show which she participates in daily. She won a daytime Emmy in 2016 for the show as a creator and producer. She was also recently part of the revival of the “Roseanne” show that debuted in 2018. The new “Roseanne” was canceled following star Roseanne Barr’s racist tweet targeted at former Barack Obama adviser Valerie Jarrett. Sara stood behind ABC’s decision to cancel the show saying ““I’m sad for the people who lost their jobs in the process, however I do stand behind the decision that ABC has made. I am proud of the show we made. The show has always been about diversity, love and inclusion. And it’s sad to see it end in this way.” Sara had previously responded to Barr’s comments with a tweet of her own:  “Roseanne’s recent comments about Valerie Jarrett, and so much more, are abhorrent and do not reflect the beliefs of our cast and crew or anyone associated with our show. I am disappointed in her actions to say the least. This is incredibly sad and difficult for all of us, as we've created a show that we believe in, are proud of, and that audiences love — one that is separate and apart from the opinions and words of one cast member."

FAQ: How old is Sara Gilbert?