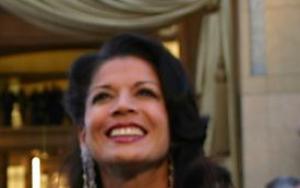 Dina Eastwood is known as an American TV anchor. She is most famous for being the wife of American actor and director, Clint Eastwood.

Dina Marie Ruiz was born on July 11, 1965, in Castro Valley, California. She was born as the daughter of Michael Ruiz and Mary Lou Ruiz. Her father, Michael, was a teacher in Fresno and had an interesting life growing up. He was adopted by a Portuguese and Puerto Rican couple as a baby and later learned that his biological father was African American and Native Hawaiian while his biological mother was Japanese and Hawaiian. Combining that, with the fact that Dina’s mother is of English, Irish and German descent, Dina likes to consider herself a citizen of the world.

Dina Eastwood's first real job came in 1990 when KNAZ-TV in Arizona hired Dina as the news anchor. After that, there was a position at KSBW in the Monterey-Salinas, California market. In 1997 she retired but came back shortly in 1998 to host the television show, A Quest for Excellence.

Dina met Clint Eastwood when she interviewed him in 1992. Clint started flirting with her during the interview. Later, when Clint attended a function in Spanish Bay, he happened to sit next to Dina. They soon went on their first date. A few years later, in 1996, the couple got married and gave birth to a beautiful little girl named Morgan.

In 2012, Dina went to rehab for depression. Four months later, she announced that she and her husband had been living separately for a very long time and filed for a divorce. The separation was messy. Clint refused to pay alimony to Dina and asked for shared custody of their daughter. Clint stated that he had a prenup signed by Dina stating that she did not want alimony from him. Documents obtained show the couple had signed the papers long before they became necessary for the procedure so the judge's signature was the final thing needed to officially end their union.

Dina said that Clint did not do anything wrong in the marriage and it was the people around him who made life miserable for Dina. After their separation, Dina started dating Scott Fisher and Scott’s former spouse, Erica, became Clint’s new girlfriend. It was revealed that Scott was Dina’s high school boyfriend, a detail that added to the romance of the newly formed couple. Scott and Erica got separated after 10 years. When Scott started dating Dina, Erica became very uncomfortable and platonic. She started talking to Clint about their relationship. Soon, Erica and Clint started to date. Dina came to know about this new relationship only when they attended her stepdaughter’s wedding. It was too much for Dina to take and she checked into a depression and anxiety rehab in Arizona.

FAQ: How old is Dina Eastwood?

FAQ: What is Dina Eastwood networth in 2020?