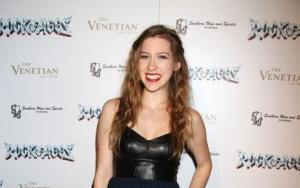 Eden Sher was born on December 26, 1991 in Los Angeles, California. She works as an American actress and is most famous for her role as Sue Heck on the ABC comedy show The Middle and as the voice of Star Butterfly on the Disney animated series Star vs. the Forces of Evil.

Eden Rebecca Sher born in a Jewish family and was raised by her mother. Eden’s mother worked as a school teacher while she raised her children as single mom. Eden Sher has two brothers, one elder and the other one is younger than her.

Eden Sher's acting career spanning from the year 2001 to the present can be regarded as a fruitful one where she has come off age and learned the tricks of the acting trade.

Eden Sher has had many roles in television series throughout her career as an actress. But it was her role as Sue Heck played in The Middle which brought her fame and a starring role. Eden Sher won the prestigious Critics' Choice Television Awards for her role in The Middle in the category for the Best Comedy Supporting Actress in 2013.

When asked by Vulture Magazine how she relates to her character Sue, Eden said, “How much of myself has been infused into it. The discrepancy in age … I’ve always been four or five years older than this character. But since she started college, she sort of caught up to me. Twenty-one feels way less of an age gap than 13 to 17. I’ll do a scene or I’ll have this speech that means so much to me, and it’ll feel so personal. I’ve gotten better at acting. [Laughs.] I’ve seen the pilot again recently and I’m like, “Oh my god, I was so bad! I could’ve played that so much better!” It’s a good thing that I’ve learned so much and improved, but it continues year after year to become more personal. I used to eschew the whole “Sue is different than me” attitude, but now it’s like, I don’t know. She’s actually not that naïve. It’s this weird blurred line where Sue ends and Eden begins.”

In 2006, Eden Sher played the role of Gretchen in the comedy-drama series Weeds on Showtime. That same year she portrayed the role of Carrie Fenton in the series Sons & Daughters, which however was unfortunately cancelled eleven episodes into the first season. Eden also played a small character in the last season of the popular series, The O.C. She also had a small role in the short film, 'Stuck'.

Eden also got some commercial jobs to pay the bills. She was hired to do advertisements for Capital One and Fruity Pebbles.

Eden Sher admitted in an interview that she firmly believes and practices the tactic of living in the character to bring out the real essence of the character she portrays.

FAQ: How old is Eden Sher?