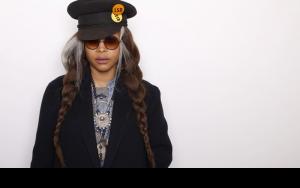 Born as Erica Abi Wright, on the 26th of February 1971, she popularly famous as Erykah Badu. The latter is a stage name she adopted. Erykah’s father left his family when she was of a tender age and she along with her siblings were raised by her mother, single handedly. Her mother, a theatre actress cast deep influence on her and she inspired to become a stage performer. She started early with her mother and at the age of four she performed at the Dallas Theatre centre.

By reaching her teens she became a prolific performer and with her understanding of the world she changed her name to Erykah Badu. Badu did her graduation from the Booker T. Washington High School for the Performing and Visual Arts and later studied in the Grambling State University for specialising in theatre. However, soon she found music calling and dropped from college to concentrate on music work. Meanwhile she indulged in various small and part time jobs for daily expenditure management.

Her musical biography started years back but she was only able to debut in the industry in the year 1997 with the album Baduizm which gave her an overall acceptance and success in the industry. It even topped the Billboard charts. She was often measured with Billie Holiday for her singing style. Her first very album bought Grammy award for her. In the year 2000, Badu released Mama’s gun, which was not a critical success yet a commercial hit. Next she release the album Worldwide Underground in the year 2003 whose sale landed it in to the gold selling category. Songs sung by Badu many a times have made it to the R&B list.

Later on, she also judged the Independent Music Wards in the year 2005. A music festival, The Sugar Water Festival was founded by her along with three other singing stars. After spreading in the arenas of America the festival eyed to spread in Asia and Europe. Badu also took part in world tour in the year 2008 and 2009. The 2008 tour was known as The Vortex Tour and started from the US reaching Europe. Apart from music career, Badu has acted in quite a few films in which her work was decent. Also, she is a prominent human rights activist in Dallas and has a NGO by the name of Beautiful Love. The aim of the organisation is to help the youth in their success.

A vegetarian by diet, Badu turned to Vegan in 2008. She have had multiple relationships and has a bunch of children from those. Her first romantic involvement was with Andre 3000 in the year 1995. Later in 2000 she was involved with Soulquarian Common and in 2004 her partner was The D.O.C. Her last known boyfriend was Jay Electronica. Her kids are very dear to her. She also recorded a live album when she was pregnant with her second child. Erykah Badu has made a special place for her in the music industry all with her hard work and perseverance. With fame and success she has brought her net worth to $12 million.

FAQ: How old is Erykah Badu ?