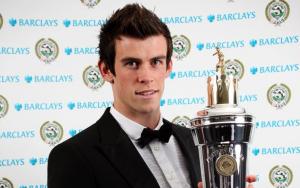 Gareth Frank Bale was born on July 16, 1989 in Cardiff, Wales to Frank and Debbie Bale. He was raised in an ordinary family, his father was a school caretaker and his mother Debbie is an operations manager. Gareth also has an elder sister Vicky. His uncle Chris Pike is a famous footballer too. He studied at the Eglwys Newydd Primary School as well as at Whitchurch High School in his homeland.

Gareth began his football career when he was 16 years old. In the 2006 he became a player of Southampton. The next year Gareth signed contract with Tottenham Hotspur club for a four year deal. During 2007-2009 he played for Spurs. Her first game was on July 2007. On December in the same year he got an injury and had exploratory surgery and become out of business for a while. In the 2008 Gareth signed new four year deal. In the 2009 he got another surgery for a knee injury and finally comes back in the end of the year.

In the 2013 Gareth became a player for Spanish club Real Madrid. He was transferred for about 100 million euro. He signed a six-year contract and was involved during the last years in games against Malaga, Sevilla and Schalke. Bale helped to Real Madrid to win the Copa del Rey of 2013 as well as on the Champions League of UEFA scoring a lot of goals.

His career for native Wales was began in the 2006. He was first chosen for the game against Trinidad and Tobago. Later he appeared on Euro 2008 qualification where he also scored a goal and became the youngest player who did it in Welsh national team. In fact he has English roots by her grandmother so he can play foe England on Euro, but he chooses Wales. In the 2009 after his injury lay-off he was involved in the World Cup qualifier. He also scored 2 goals against Scotland in 2014 World Cup qualifier in the end of 2012. In the 2016 during UEFA Euro he scored an opening goal against Slovakia. He also was involved in a 2012 London Olympics as the player of Great Britain Olympic football team.

Gareth was honored by numerous awards for playing in games of FIFA Club World Cup and UEFA Super Cup. He was described as a player with top speed, amazing crossing ability and great left foot. Gareth is active in charity work and also involved in a campaign against Ebola virus. He also a businessman, currently he has a deal with such a big companies like Adidas and EA Sports.

He is not married till now. He lives along with his longtime partner Emma Rhys-Jones, which Gareth met in high school. Together they are blessed with two children, beautiful daughters Alba Violet and Nava Valentina. Currently he resides in Madrid along with his loved one and their daughters. A famous footballer has an estimated net worth of that whopping $90 million dollars and also earns massive salary from Real Madrid of 15 million pounds.

FAQ: How old is Gareth Bale?