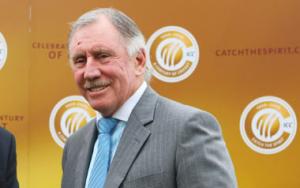 Ian Michael Chappell is a former Australian cricketer who played for both South Australia and the Australian national team. He was Australia's captain from 1971 to 1975 before helping to establish the World Series Cricket organization.

On September 26, 1943, Ian Chappell was born as the first child in a family of three sons. Ian Chappell drew much of his inspiration and motivation for cricket from his family since both his brother and grandfather were successful cricketers, having captained Australia. His father, Martin, was an Adelaide grade cricketer and placed a bat in Chappell's hands immediately after he started walking. His maternal grandfather, Vic Richardson, was a renowned all-around sportsman who captained Australia, completing a nineteen-Test career. Alongside his younger siblings Trevor and Greg, Chappell received weekly batting lessons at a tender age. Chappell claims that Vic Richardson significantly influenced his cricketing career.

Chappell's first engaged in a competitive match while he was seven years at St Leonard's Primary School in the suburb of Glenelg. Later, Chappell received an offer to join the South Australian State Schoolboys Team. After completing primary school, Chappell enrolled at Prince Alfred College, one of the private secondary schools famous for producing most of the Test cricketers such as Clem Hill and Joe Darling, former Australian captains.

Although Chappell's start to his international career was hesitant, he earned a reputation in the game over the years as a great captain despite starting as a spin bowler and right-hand middle-order batsman. Chappell found his niche after receiving a promotion to bat. His career is marked by a myriad of confrontations with cricket administrators and opposition players due to his blunt verbal manner. During Chappell's tenure, the aspect of sledding in Australian cricket came to be generally accepted.

Alongside cricketing, baseball and Australian football are among Chappell's other sporting pursuits: his performance in the Claxton Shield while playing for Australia brought about his All-Australian selection as a catcher in 1964 and 1966. Les Favell's SA captain and Sobers' aggressive style heavily influenced Chappell, particularly during his senior cricketing formative years.

Ian Chappell retired in 1980 and had since then been enjoying a comfortable life. After his retirement, Chappell pursued a high-profile media career with cricket commentary and sports journalism, predominantly with Channel Nine. Chappell has a column under his name in a mainstream paper. He remains an elementary figure in Australian cricket. Shane Warne, in 2006, asserted that Chappell profoundly influenced his career.

After high school, Chappell worked as a clerk in a stockbroker's office for two years before pursuing a career in league cricket in England. He subsequently went on to work as a promotional representative for Nestlé and, later, for the cigarette company WD & HO Wills, where he met his future wife. In 1981, after eight years with Wills, Chappell took advantage of his celebrity as an Australian captain by establishing his own company, which specialized in advertising, promotion, and journalism, and which has remained his primary occupation to this day. He has been married twice and has a daughter (Amanda) from his first marriage to Kay. Chappell is now a resident of Sydney, where he lives with his second wife, Barbara-Ann. Over the last few years, Chappell has been a well-known advocate for improved treatment of asylum seekers by the Australian government, particularly concerning the country's policy of mandatory detention. He is a founder member of the Australian Republican Movement, which advocates for the dissolution of Australia's links with the United Kingdom and establishing a republic.

In July of 2019, Chappell revealed that he was getting treatment for a skin cancer diagnosis.

To follow up his 1972 Ashes tour memoir, Chappell wrote many books of cricket-related humor and tales in the early 1980s. A more in-depth look at contemporary cricket, the Cutting Edge was released in 1992. Ashley Mallett and Ian Chappell collaborated on Chappelli Speak Out, published in 2005 under the title Hitting Out - the Ian Chappell Story in the UK. In light of Chappell's criticism of Steve Waugh, who he labeled "selfish" and a skipper who "ran out of ideas very quickly," the argument began. "To say that Chappell's critique angered me would be an understatement," Waugh wrote in response. Chappell "always sweated over my blunders and reported them with an 'I told you so' mentality," he claimed, labeling the critiques "personal." In 2006, Chappell wrote a collection of writings about cricket called A Golden Age. He frequently contributes to Cricinfo.com.

FAQ: How old is Ian Chappell?