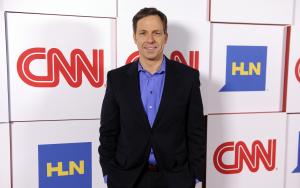 In June of 2015, Jake began hosting CNN's Sunday political show, State of the Union with Jake Tapper. The show became well known for Jake's tough interviews with various politicians including challenging Senator Bernie Sanders to release his tax returns, asking Jeb Bush why Hillary Clinton is responsible for Benghazi if his brother George W. Bush was not responsible for the terrorist attacks on 9/11, asking Hillary Clinton about the emails on her private server and following FBI investigation, and asking Donald Trump if he would denounce support from the Ku Klux Klan and other white supremacists.

Jake created the comic strip Capitol Hell from 1994 to 2003 and also created cartoons for The American Spectator, the Los Angeles Times, and the Philadelphia Inquirer. Jake's first novel, The Hellfire Club, was published on April 24, 2018 by Little, Brown and Company. It's a political thriller set in 1950's Washington. It debuted at Number 3 on the New York Times Best-Seller List for Hardcover fiction, and was placed on the list for a total of four weeks. A film adaptation, The Outpost, will star Milo Gibson, Orlando Bloom, Scott Eastwood, and Caleb Landry Jones. Jake has also written Down and Dirty: The Plot to Steal the Presidency based ont he 2000 Presidential election. His novel The Outpost: An Untold Story of American Valor, debuted at number 10 on the New York Times best seller's list for hardback non-fiction and earned him the Tex McCrary Award for Excellence in Journalism from the Congressional Medal of Honor Society in 2014.

Jake won the Walter Cronkite Award for Excellence in Political Journalism in 2017, among a number of other awards. In 2018 he was awarded a Vetty for his coverage of veteran's issues. The proceeds for The Outpost, the film adaptation of his novel, will be donated to a number of veteran's charities.

Joe Walsh, a former Republican congressman from Illinois, said of Jake: "He and I probably disagree on damn near every issue. But having said that, I don't think there's anybody more fair and objective in what we call the mainstream media." An editor and writer for the New York Times, Bari Weiss, added "[Jake] is one of the few people who's generally watched and respected, at least in my world, by people across the political spectrum."
Jake states "Probably like a lot of people, my personal politics are all over the map. I'm not a member of a political party, and I feel very, very comfortable being independent."

Jake was married in 2006 to Jennifer Marie Brown. They met in 2004 while covering he was covering the Presidential campaign. Jennifer is a former field manager for Planned Parenthood and she currently volunteers her time to reading to primary students in Washington D.C. where her family resides. Jake and Jennifer have two children of their own, Alice and Jack.

FAQ: How old is Jake Tapper?