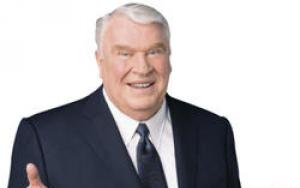 John Earl Madden is a former football coach and sportscaster from the United States. He was the head coach of the Oakland Raiders when they won the Super Bowl, and after resigning from coaching, he became a well-known color commentator for NFL broadcasts. He was inducted into the Pro Football Hall of Fame in 2006 for his coaching achievements.

John Madden is a retired American football coach and sportscaster born on April 10, 1936, in Austin, Minnesota, in the United States. He was born to Earl Russel and Mary Margaret Madden. When he was young, Madden moved to Daly City, California, where he attended Catholic parochial school Our Lady of Perpetual Help. He graduated from the Catholic school in 1950 and went on to attend Jefferson High School. He graduated from high school in 1954 and went on to win a football scholarship to the University of Oregon, where he studied pre-law. Madden attended the College of San Mateo in 1955 and then Grays Harbor College in 1956. He transferred to Cal Poly in San Luis Obispo, where he played for the Mustangs in 1957 and 1958. He graduated with a BS in Education in 1959 and an MA in Education in 1961. Madden was drafted in the 21st round by the Philadelphia Eagles in 1958, but an injury to his knee ended his playing career before he ever played in a professional game.

He decided to use his degree to coach football as an assistant coach at Allan Hancock College in Santa Maria. In 1962, Madden was promoted to head coach. He eventually became coach of the Oakland Raiders and led the team to a Super Bowl win in 1977. On December 26, 1959, Madden married Virginia Fields after meeting in a bar in Pismo Beach. They raised two sons named Joseph and Michael. Madden and his wife currently reside in Pleasanton, California.

Madden was a high school football hero who went on to play one season at the College of San Mateo in 1954 before being offered a football scholarship to the University of Oregon, where he studied pre-law and played football with boyhood friend John Robinson. Due to a knee injury, he was redshirted and underwent surgery. Then he went to the College of San Mateo in 1955, Grays Harbor College in the fall of 1956, and Cal Poly in San Luis Obispo in 1957 and 1958, where he played attack and defense for the Mustangs. While completing a BS in Education and an MA in Education in 1959 and 1961, respectively. He was an offensive tackle for Cal Poly and a catcher for the baseball team, earning all-conference honors. Madden was drafted by the NFL's Philadelphia Eagles in the 21st round (244th overall) in 1958 but suffered an injury to his other knee in his first training camp, ending his playing career before he ever got an opportunity to play professionally.

Madden reminisced about how he got into coaching:

In my debut year with the Philadelphia Eagles, I suffered a knee injury and could not play. Norm Van Brocklin would watch movies and explain what was going on while I was in recovery. I ended up with a teaching degree, and my passion for football coincided with my career path.

He joined Allan Hancock College in Santa Maria as an assistant coach in 1960 and was elevated to head coach in 1962. He was appointed as a defensive assistant coach at San Diego State after the 1963 season and stayed there until 1966. The 1966 Aztecs were considered among the top small universities in the country during their last season. Madden coached at San Diego State under Don Coryell, who Madden credits with influencing his coaching and who he believes will one day be inducted into the Hall of Fame.