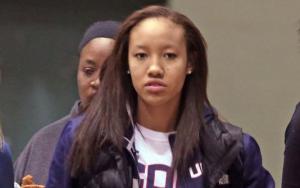 Lisa Leslie is a former professional basketball player for WNBA. She won MVP for WNBA three times and she won Olympic gold medal four times. She was the number seven pick in the year 1997 for the inaugural draft of WNBA.  She followed the career with University of Southern California, WNBA All-Star Selection and won two WNBA championships over the years with the Los Angeles Sparks.  She retired in the year 2009. Leslie is of 6’5’’ of height and she was the first player who dunk during the WNBA game. She is considered to be the cornerstone and the pioneer of her league while in the WNBA career.  During the year 2011, she became among the top 10 WNBA players who were voted by the fans.  She had been elected to Naismith Memorial Basketball Hall of Fame.

Lisa Leslie is a daughter to Christine Lauren and her husband Walter Leslie.  He was a semi professional basketball player.  Christine began her own truck driving business in order to support the children.  The father left his family when Lisa’s mother was four months pregnant.  Lisa was born with two sisters, Tiffany is eight years young and Dionne is five years older.  Her brother Elgin, is the Carondelet High School Basketball coach. Lisa was the player for the All-Boys basketball team while in middle school. She was also playing in the All-Girls team and she had the stats of 33-1.

When Lisa Leslie was in the middle class, she had already reached the height of 6’1’’. However, she did not like to participate in the athletic activities, and she was only playing in Double Dutch and Tether Ball. When she joined the basketball team for the first time, the students were told to divide themselves according to the righties and the lefties and she was the only lefty. She decided to learn how to use the right hand so that she will not stand alone again. This is something that helped her in her playing since she is ambidextrous. She played for high school, college, WNBA and USA basketball.

From her bio, Lisa Leslie was married to Michael Lockwood and she took a professional leave since she was pregnant. She gave birth to a daughter called Lauren Jolie and was born in 2007. After the pregnancy she went back to play and in the 2010, she gave birth to a baby boy.  Lisa Leslie is also an aspiring actress and a fashion model. She features on NewsWeek and Vogue.  She appeared on ESPN many times and she was the guest star for different television shows. Her net worth is over 5 million dollars and her salary is around 91 thousand dollars. Lisa has a Masters of Business Administration that she got from University of Phoenix.

FAQ: How old is Lisa Leslie?