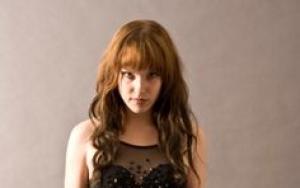 Lzzy Hale , real name Elizabeth Mae Hale, was born on October 10,1983 in Red Lion Pennsylvania. She is of American descent. Her mom is a financial manager, and her dad is a bus driver. Her parents wanted Lzzy to pursue a career in management or medicine. She didn't follow the plans her parents had for her. Instead of pursuing her parent's dreams, Lzzy knew she would always become  a musician.Elizabeth Hale started playing the piano at the age of four, as her bio states. In her teens, she learned to play the guitar, which helped her to found her rock band Halestorm.. Lzzy Hale has one male sibling - Arejay Hale, who is also a member of Lzzy's band Halestorm. Even though her parents intialy had other aspirations for her, lzzy has stated that they have always supported her ambitions, even describing them as "The Partridge Family - meets- Spinal Tap". "When my brother and I got tunnel vision and said this is really what we want to do, my mom and dad told us to go for it now and they'd be behind it the whole way. If they had said no, we wouldn't be doing this right now" Hale said in an interview, speaking on her parents.

Lzzy Hale started her education path in a local elementary school in the surroundings of Red Lion, PA. After her primary education, Lzzy attended the William Penn High School in Harrisburg, PA. She was an excellent student during her high school education with straight A's. She also sang in her high school's choir, according to her biography. Lzzy didn't attend any college, but she is living evidence that the musical talents need no education to be successful.

Lzzy and Her brother both began learning to play the piano around 5 years old, The two were already writing and playing their own songs by their early teens. Lzzy started her professional career in music as young as 14 years of age.By age 16, she was already playing the guitar and Arejay loved the drums. Their father even got in on the act and served as their drummer in the beginning. In fact, her parents still are actively involved with her career. " I let my parents work for me, mom is TM and dad is bus driver, because it's my way of giving back to them, they sacrificed a lot to enable my brother and I to pursue our dream. Plus, they are very good at the jobs they were given. It's wonderful to watch them experience all our milestones with us. It's just how we roll" Lzzy said in an interview on the band's site.