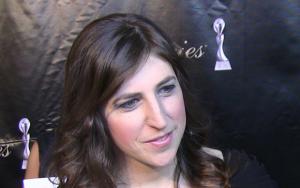 Born Mayim Hoya Bialik this American actress is best known for her portrayal of Blossom from 190 until 1995 and her current portrayal of Amy Farrah Fowler on the hit series the Big bang Theory on CBS. Since being cast as Amy Farrah Fowler Mayim has been twice nominated for a Primetime Emmy in the category of Best Supporting Actress in a Comedy Series.

Mayim Bialik was born on December 12, 1975 in San Diego, California to Barry Bialik and his wife Beverly Winkelman. Her parents raised her in Reform Judaism.

She attended Walter Reed Jr. High School. At the end of the series Blossom Mayim decided to go to college at UCLA. She had applied to both Harvard and Yale, and was accepted at both of these Ivy League Universities.  Mayim reasoned that she did not want to leave the west coast and she wanted to be close to her parents.

Mayim left UCLA with degrees in neuroscience, and Hebrew and Jewish studies. She even furthered her education by entering the program for neuroscience and earning her PhD. She completed her PhD in 2007 with a dissertation on the investigation of hypothalamic activity in people who suffer from Prader-Willi syndrome.

Mayim began acting in the eighties as a child performer. She had a part in the 1988 horror film called Pumpkinhead. She went on to appear on the Facts of Life and on Beauty and the Beast. She was a recurring guest in three different episodes of McGyver. She was cast to play a young Bette Midler in the movie Beaches. She even had a part in the Liberian Girl video.

By 1990 Mayim actually had two television sitcoms that she was tied to. She was shooting 6 episodes for the Fox station in their sitcom Molloy. NBC had also hired the young actress to do their pilot episode of Blossom. She shot the pilot for Blossom after the six episodes for Molloy, but the Blossom premier happened before the Molloy show. Blossom did far better than Molloy and Mayim stayed on the show until it was cancelled five years later.

She joined the rest of the cast of The Big Bang Theory during the 2009-2010 seasons. At first she was simply cast as a possible love interest for Sheldon. Then in season 4 she returned to the show as his friend, and by the eighth episode of that season she was a regular returning character.

On August 31, 2003 Mayim married Michael Stone. The wedding had a Victorian theme and the couple followed all of the traditional custom. She shares two sons with Stone. Miles was born in 2005 and their youngest son Frederick was born in 2008.

In November of 2012 the couple made the announcement that they were going to be divorced due to irreconcilable differences.

Mayim takes her Jewish beliefs very seriously and has been quoted to have described herself as Modern Orthodox. She has starred in many videos produced by Allison Josephs answering questions about Judaism and the Jewish beliefs. These videos are aired on YouTube.

FAQ: How old is Mayim Bialik?