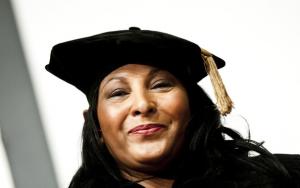 The reigning queen of the '70s blaxploitation genre that still influences culture till this day, Pamela Suzette Grier was born May 26, 1949 in Winston-Salem, NC. The daughter of Clarence Ransom Grier Jr, a technical sergeant and mechanic with United State Air Force and Gwendolyn Sylvia Grier, who was a nurse and a home maker, Grier grew up form one brother and a sister. She is a mix of many cultures: Hispanic, Filipino and Chinese. Her father was black while her mom was a Cheyenne Indian. Growing up, Grier was a good student who dreamed of becoming a doctor. “When I was a young girl, I never thought of acting,” she remembers. “I never thought of television, of fans, movie stars, signing autographs. It never crossed my mind.”

When she was only six years old, a young Grier was raped by two boys when she was left alone from the house of her aunt. She said that it took too long to overcome the pain and her family had to endure too much anger and live with the guilt that something so horrible like that may have happened to her. At the age of 18 she was the victim of a date rape. Fearing repercussions on her family, Grier never said a word to anyone about either incident until she sat down to write her memoirs as an adult. “I wanted others out there to understand the emotional trauma that is involved in sexual aggression and abuse and that not all of us get over it or even survive the abuse,” she says about her decision to finally reveal the incidents. “I have that opportunity to speak about this as the icon—the object and let others know that in spite of it all, I am still here.”

During her teen years ,Pam Grier had to move too much because of her father's military career. The family had lived in many different places including England, but after a while they settled in Colorado where she attended East High School. She appeared in many stage productions there. At the age of 18, Grier entered the Miss Colorado Universe pageant; was named first runner-up, and by a mixture of talent, luck and chance, attracted the attention of Hollywood agent David Baumgarten, who signed her to a contract.

After relocating to Los Angeles for the contract, like many Hollywood dreamers, Grier struggled to mount an acting career, and worked as a switchboard operator at the studios of Roger Corman's American International Pictures; finally, with Corman's aid she made her film debut in the 1970 Russ Meyer cult classic Beyond the Valley of the Dolls, followed by an appearance in Jack Hill's 1971 cheapie The Big Doll House. For several years, Grier languished virtually unnoticed in grindhouse fare like 1971's Women in Cages and 1973's Arena (aka Naked Warriors) before winning the title role in Hill's 1973 action outing Coffy.

But Grier wasn’t satisfied. She knew that women needed to demand their respect in a male dominated Hollywood. “You know, I had to bump heads with a lot of men in the industry,” Grier says. “They were not comfortable with showing a progressive black female in an action role. As a strong woman, I was seen as a threat. There was a fear that women would mimic me in real life. I remember certain people saying: ‘Oh, she’s taking our jobs, she’s castrating men’ – as far as I was concerned, I thought: ‘We don’t need to walk behind you, we should walk beside you.'”

FAQ: How old is Pam Grier?