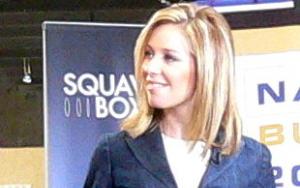 Rebecca Quick, often known as “Becky Quick” is an American journalist and a co-anchor of CNBC’s “Squawk Box”.  Squawk Box is a news program which is broadcasted in the morning.  This is a total business news show where Rebecca is co-host. Joe Kernen is the co-host working with Rebecca Quick.  Their show deals with the latest news of the market dealing with financial matters.

Rebecca has a bachelor’s degree in Political Science from the University of Rutgers in 1993.  She has also done a fellowship in Times Mirror.  The institute of Journalism Resources awarded this fellowship award to her because of her hard work, dedication and the project she completed under this fellowship program.  It was her keen desire and the ability to learn things quickly that helped her to complete the project on time and follow the instructions of her mentor.  While at Rutgers, she earned a good experience in journalism.  Before working for CNBC Rebecca worked for “The Wall Street Journal” for good seven years.  She has also worked for a Hospital before coming in her current profession.  In her journalism career she has interviewed a number of rich people.  Rebecca has also contributed for the foreign affairs of “The Wall Street Journal”.  At the same time worked on the online journal of the Wall Street.  While for working for Wall Street, she has taken the interview of Mr. Gates, Mr. Dimon, Mr. Greenspan, Mr. Munger and many more.  She has also hosted a few important conferences, which includes one for Microsoft.  In addition to this Rebecca also contributes a column in Fortune magazine.  This is a regular column.

Rebecca was born on 18th July 1972.  Rebecca is among the most attractive personalities of the TV world.  At the age of 41 years she still looks young and energetic.   She is also among the most successful ladies of the United States and owes a high bank balance.  One of the online websites on the internet quoted that Rebecca is among the highest paid journalists who earns hundreds of thousands per year.  The website also quoted that she has bank balance and property worth millions of dollars.  On TV channels Rebecca is making news with her presence in one of the most watched business news shows “Squawk Box”.  Even on the internet she is very famous.  She is one of the most searched journalist’s, on the internet.  She also has a number of followers on the social networking websites.

Rebecca married twice.  She married her first husband in 2006.  She married to Peter Shay in 2006 and the couple was settled in New Jersey.  Later in the year 2008 she married to Matt Quayle.  Mr. Quayle is working as a producer of the show Rebecca is hosting, “Squawk Box”.  It might be possible Matt Quayle was Rebecca’s boyfriend prior to their marriage, but the news is not confirmed.  After two year of her marriage with Matt, Rebecca became the mother of a baby boy.  The couple named their child as Kyle.

FAQ: How old is Rebecca Quick?

FAQ: What is Rebecca Quick networth in 2020?