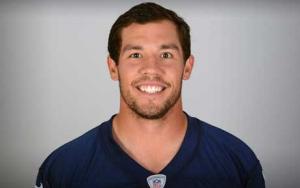 Sam Bradford was born on November 8, 1987 in Oklahoma City, Oklahoma. He went to Putnam City North High School where he played basketball and golf alongside football. In the senior year, he excelled in both football and basketball with 2029 throwing yards and 17 touchdowns in the former and averaging a double-double in the latter.

After such a performance went to Oklahoma University on an athletic scholarship where he featured for the Oklahoma Sooners from 2006 to 2009.

In the 2007 season, Bradford, then a redshirt freshman, won the bid to become the starting quarterback following a long trial process for the vacant position. He broke the school’s passing record with 21 completed passes out of 23 including 3 touchdowns on his debut against the UNT. Next on his agenda was the school record for most consecutive pass completions, which he took down the very next game, with 22 consecutive passes.

The above stat should give some idea about that season went for Bradford, as he led his team to the Big 12 Championship and breaking the NCAA record of most touchdowns with his tally of 30.

His sophomore was an equally brilliant one, earning him the Heisman Trophy for the 2008 season and the Sooners their sixth Big 12 title. Bradford said he won’t be entering the NFL draft in 2009 so that he could return to OU to play out his junior season.

In his injury plagued junior season, the Sooners faltered badly. He underwent a surgery that would end his season after injuring his shoulder twice.

In the 2010 NFL draft, despite being fresh out of surgery, Bradford was the first selection of the draft for the St. Louis Rams where he played the next four years. He signed a six year deal worth $78 million that came including a guaranteed $50 million making him the richest NFL rookie in history. Later that season, in September, he was named the starting QB for the Rams for that season.

Bradford grabbed the opportunity and by the end of the season he had broken a few records including most passes by a rookie, most consecutive passes by a rookie as well as most pass attempts by a rookie. All of these were held by Peyton Manning before him. He achieved the AP Offensive Rookie of the Year for that season.

His next two seasons were uneventful due to lackluster performances by the team although the 2012 season ended with Bradford’s career best stats. He was a having a good season personally despite the Rams faltering in the 2013 season before he tore his left ACL thus ending his season. The following year his ACL gave way in the pre-season itself, thereby ending his association with the Rams.

He continues to break records at the Philadelphia Eagles where he just renewed his contracts for two years, worth $36 million.

FAQ: How old is Sam Bradford?