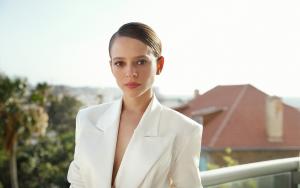 Shira Haas is an actress from Israel. She rose to recognition in Israel for her appearances in local film and television, winning two Israeli Ophir Awards out of five nominations since 2014. Her role in the Netflix drama Unorthodox earned her widespread attention in 2020. She became the first Israeli actor to be nominated for a Golden Globe and a Primetime Emmy Award for this performance. Haas earned the Tribeca Film Festival Award for Best International Actress for her role in the Israeli drama film Asia in the same year (2020).

Haas was born to a secular Jewish household on May 11, 1995, in Tel Aviv, Israel. Her parents, born in Israel, are Ashkenazi Jews of Polish, Hungarian, and Czech ancestry. During World War II, her grandpa, a Holocaust survivor, was imprisoned at the Auschwitz concentration camp. Her family moved to Hod HaSharon when she was a year old, and she spent the majority of her childhood there. Haas was diagnosed with kidney cancer when he was two years old and recovered two years later following a series of grueling therapies.

She began acting in plays at the Cameri Theater at 14, including Ghetto and Richard III. In 2013, she made her television debut in the drama series Shtisel as Ruchami Weiss. Haas studied theater in Givatayim's Thelma Yellin High School of the Arts before serving in the IDF's military theater for a brief time.

Haas was approached by a casting director named Esther Kling via Facebook message while studying at Thelma Yellin in 2014. She urged Haas to try out for the leading part in the film Princess (2014). The New York Times complimented Haas for her "really stunning lead performance" when she landed her first job at 16. The Hollywood Reporter admired her "petite body and baby-smooth complexion" for fitting the part of a 12-year-old character. She won Best Actress prizes at the Jerusalem Film Festival and the Peace & Love Film Festival and a nomination for Best Leading Actress at the Israeli Ophir Awards for her performance.

Haas made her international cinema debut in Natalie Portman's directorial debut, A Tale of Love and Darkness, in which she played young Fania (2015). Haas made her primetime American talk show debut on The Today Show in 2016 opposite Jessica Chastain in Niki Caro's The Zookeeper's Wife (2017). Foxtrot (2017) earned her second Israeli Ophir Award nomination for Best Supporting Actress after making the final shortlist for the 90th Academy Award for Best Foreign Language Film. By the beginning of 2018, Haas had established herself as a leading actress in several popular Israeli drama series, including Shtisel (2013–2020), The Jeweler (2015), The Switch Principle (2016), Harem (2017), and The Conductor (2018). Haas was nominated for Best Leading Actress for Broken Mirrors (2018) and Best Supporting Actress for Noble Savage (2018) at the 2018 Israeli Ophir Awards, winning the latter. In 2018, she starred as Leah in Helen Edmundson's Mary Magdalene, directed by Garth Davis. She was named to the Israeli Forbes list of 30 under 30 in February 2019, before starring alongside Harvey Keitel in Esau, her second biblical picture (2019).

Haas arrived in Berlin two months before filming for Unorthodox, a limited Netflix series, to study Yiddish, the characters' principal language. In addition to Yiddish lessons, Haas had to shave her head and take piano and singing lessons to play Esther "Esty" Shapiro, who flees her arranged marriage and Ultra-Orthodox community in Williamsburg, Brooklyn, New York City. The series is based on Deborah Feldman's genuine narrative, which she chronicled in her autobiography of the same name.

"Mesmerizing" and "excellent," according to Brigid Delaney of The Guardian, who added, "physically little, like a child, the audience is immediately protective of her." Forbes' Sheena Scott said Haas "delivers a fantastic performance as Esty, full of subtlety, sensitively portraying her character's inner struggle and happiness without saying a word." According to Hank Stuever of The Washington Post, she "lends a somber and yet vulnerable luminosity to the character." For this portrayal, Haas was nominated for Best Lead Actress in a Limited Series at the 72nd Primetime Emmy Awards, making her the first Israeli to be recognized for an acting Primetime Emmy Award.

Due to the COVID-19 epidemic, Haas starred with Alena Yiv as a daughter who uses a wheelchair in the Israeli film Asia (2020), which premiered online at the 2020 Tribeca Film Festival.

Haas won the festival's Best International Actress prize for her performance. "Her face is a never-ending landscape in which even the simplest expression is painful," the jury wrote. Her role in the film garnered her the medal for Best Supporting Actress at the 30th Israeli Ophir Awards. She and several Israeli celebrities took part in a virtual celebration to commemorate Israel's 72nd Independence Day in late April 2020. In June 2020, Haas was signed to Creative Artists Agency.

Help us Edit this article and get a chance to win a $50 Amazon Gift card.
Last Modified: Oct 25 2021
You may also like
articles you may like