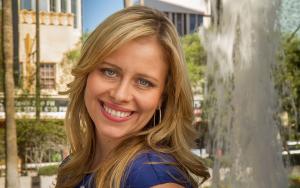 What happened to Stella Inger and her family is very similar to thousands of Russian Jews who left their country for religious freedom, the experience shaped her at a young age, and has stayed with her all throughout her life. “My parents sacrificed everything. I’m going to do everything I can to make them proud,” she told the Arizona Jewish Post. There is no doubt in anyone's mind that she has already made her parents very proud of her. She is an inspiration to all.

Stella Inger started her career in broadcast journalism at KXLF situated in Butte/Bozeman, Montana.  Prior to landing a job at the CBS affiliate, she interned at CNN’s Los Angeles Unit and also did twice at KABC. She also did a brief stint at KPSP of CBS in Palm Springs, California. She then shifted to KTVK. She also served as a reporter at ATVN. She was an anchor/reporter for “Good Morning, Arizona,” in Phoenix, until coming to Tucson at the end of October.

Stella Inger was named as the Best TV Personality in the Desert by the local newspaper in California, The Desert Sun.  She was also honored with the Best Use of Social Media in a Newscast award from the LA Press Club. She has received two Emmy nominations. Her first nomination was in the year 2007 for her investigative report in the wake of September 11 attacks related to Americans converting to Islam. Her second Emmy nomination was in 2010 for anchoring the morning show. She was named the Woman of the Month by Midlifebachelor.com in the year 2008, when she was working at KPSP-TV which is a CBS affiliate.

During 2010 and 2011, Inger had co-anchored the Chabad Telethlon reporting for KTLA along with celebrities like actor Tom Arnold, Larry King, NBA player Jordan Farmar, and Oscar award winner Jon Voight. During her broadcasting stint in Montana, she covered many eventful stories including the interview with Evel Knievel, the American daredevil. In the year 2008, Inger was seen in an AOL Sports report along with Shaquille O’Neal and Kobe Bryant. She also flew a fighter plane, while reporting an air show.

FAQ: How old is Stella Inger?