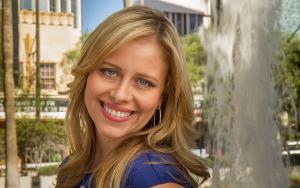 Stella Inger was born in Born in Tashkent, Uzbekistan, Russia and spent her early childhood there. Her family shifted to the United States when she was seven years old. She spent her early childhood in Sherman Oaks, California. “We came as refugees,” says Inger, while being interviewed by the Arizona Jewish Post in her office at KGUN9 television, where she works as a news anchor. “We lived for six months in Italy waiting to be ‘adopted’ by a Chabad rabbi who brought us to Sioux City, Iowa.”

Describing her early life and transition to the US, Inger says, “was a culture shock for my parents,” a Russian stay at home mom and home maker and her father, a businessman. The family stayed in Iowa for little over a year before moving to Los Angeles, California where relatives also moved to after leaving Russia. “They told my parents to move there, that there was more opportunity for work in L.A.,” says Inger. “I remember first going to school there. I had a hard time communicating. It took about six months to speak English well enough to make friends.”

During the interview, Stella remembers her family's acceptance and openness when it comes to being Jewish in America. Inger says, “In Russia, you had to hide it. I was told that my grandfather had to sneak matzah. It was like buying it on the black market. We secretly celebrated the Passover inside our homes. Both sets of my grandparents spoke Yiddish.”

Inger’s mom told her daughter she first realized people didn’t really accept Jews when she was a child in the Ukraine. Going outside, and playing at other kid’s homes, her mother constantly heard things like, “Tell this Jew to go home. I’m not feeding her.” You can imagine the kind of impact that has on a kid growing up in that kind of environment.

Even at a young age, growing up in the cultural mash up that is America, she still could understand the differences in cultures. Inger would recall saying, “being in America, I realized there was a difference between being Jewish here and in Tashkent,” which some people couldn't really understand, she felt the need to explain to others. “We became very involved in the L.A. Jewish community. Our culture, our heritage is very important to us.”

Stella remembered how hard her parents worked building a life for their family in the United States. She asked her dad what were his thoughts on their lives when they came to Iowa with almost nothing in their 30s. Ingers dad says, “‘I wasn’t too proud to take any job I could find,’ he told me. In Iowa he drove a work truck. He did factory work. He cleaned limousines. My mother had me when she was 21. She went back to school and became an X-ray technician” in Los Angeles, says Inger. “I’m following my parents' work ethic.”

She initially studied at Los Angeles Valley College and later shifted to University of Southern California where she got her bachelor’s degree in broadcast journalism in the year 2005.  During her time at USC, she also worked as a personal banker. Inger likes to spend her free time hiking and exploring the splendors of Arizona with her pet dog. She practices yoga and loves cooking. She also spends her time lending a helping hand to the animal community.

For Stella, a career in journalism fits her outgoing personality well. Describing herself, Stella says, “I’m very inquisitive. I want to know more. Everyone has a story,” she says, which reminds her of her family’s experience first coming to the United States after emigrating from Russia. “My dad was a cab driver in L.A. He has an interesting story but I don’t know if anyone has ever asked him about it. I always have conversations with cab drivers.”

FAQ: How old is Stella Inger?