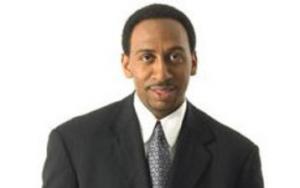 Stephen Anthony Smith was born on October 14th 1967. He works a sports journalist, TV personality and talk show host. He is employed by the major sports network, ESPN and is also a featured columnist for various publications. At the center of Smith’s various roles is his post at the WEPN weekday show in New York City. He hosts the radio show with his right-hand man B.T. also known as Brandon Tierney.

There was once an article written by Bob Raissman of the NY Daily News that suggested Smith would leave ESPN 98.7 NY for Sirius XM Radio, where he would join Chris Russo's Mad Dog Sports Channel. It was not a move that would be financially motivated. The article came a day after Smith made some controversial comments on ESPN 2's First Take regarding the Ray Rice domestic violence incident.

For a very long time, Stephen kept his personal life away from the media. As part of the machine, he knows how the media can be too invasive in the lives of public figures. The general public don’t even know what his marital status is. In 2011, he was found with a lady friend at an event on Wall Street. The media speculated if she was just the date for the evening or if she was his regular girlfriend that he was deciding to introduce to the rest of the world. He never commented on the picture or the news however and the news story slowly fizzled out.

There was also once a rumor that he had a nine year old son from a marriage that ended in divorce. He replied to the rumor by stating simply and clearly that he does not have any kids. However, he never refuted anything about the divorce claim. He got angry about the rumor until he learned that it was nothing but an innocent prank gone too far that someone decided to play on him.

There have been a few times where the camera was turned and the focus was on Stephen’s life instead of his commentary on sporting news. A few interviews have seen him talk about his rough childhood. He said that the problems he faced during his upbringing ultimately made him stronger as he became an adult. The death of his older brother, racial prejudice, educational setbacks, and career challenges did not discourage him. He said he got the inspiration and love of sports from his father, who was a huge sports fan.

When asked about what motivated him to get into sports journalism by NewsOK, Stephen said, “My father was a baseball and basketball star and was drafted by the Giants back in the 1950s. He was an inspiration. In terms of journalism, the late, great Howard Cosell was an inspiration for me, as well. It’s amazing, if you make a little bit of money and you’re investing and all of that stuff, the first people I looked at was Merrill Lynch because Howard Cosell used to do halftime highlights and he’d say, “Merrill Lynch, a breed apart.”

Continue reading about Stephen A Smith...

FAQ: How old is Stephen A Smith?