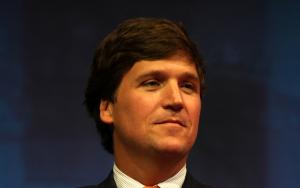 Tucker Carlson is a political news anchor in the United States and a journalist, political analyst, commentator, author, and producer. He has never shied away from expressing his political views in public as an ardent libertarian-conservative. He is most famous for his TV program called Tucker Carlson Tonight.

Tucker Swanson McNear Carlson was born on May 16th, 1969, in San Francisco, California. Tucker was raised in a suburb located in San Diego called Carlsbad. His biological parents were Lisa McNear and Richard Warner Carlson, and he had a younger brother that he looked after. Tucker was raised by his adoptive mother, Patricia Caroline Swanson, formerly Howard Feldman's wife. Her extreme wealth went back to being the only heiress of the Swanson Food Conglomerate fortune. His wealthy childhood likely influenced tucker's conservative views. His father, Richard Warner, was a former news anchor in Los Angeles.

Tucker Carlson married his high school sweetheart, Sussan Carlson. The two met when they were fifteen when they were still high school students at St. George High. The couple got married in 1991. Together, they gave birth to three girls named Lillie, Dorothy, Hope and a son named Buckley Carlson.

Tucker Carlson's career started as a member of the editorial staff of a national journal called the Policy Review. He later worked as a reporter for The Arkansas Democrat-Gazette newspaper in Little Rock, Arkansas.

Carlson has reported around the world as a newspaper and magazine journalist. He also wrote for The New Yorker and Reader's Digest as a columnist. The complete list of papers and journals he has been writing for include Esquire, The New Republic, The Daily Beast, The New York Times Magazine and The Weekly Standard.

With Neil Patel, Carlson launched a news website called The Daily Caller. He was made the editor-in-chief and often wrote his political opinions at the site. The Daily Caller has been enriched with many big-time blog writers, and its reports have been cited on many major news channels.

Carlson was working with a conservative tabloid in his starting days, influencing his thinking and values. He grew up as a traditional thinker, and his attitude is reflected in the jobs he accepts.

Tucker Carlson has been a political commentator and news commentator at Fox News for a long time, but he got his break when he joined CNN. When Carlson started at CNN, he was the youngest anchor at the station. Carlson got his start on TV as co-host of the CNN program called Crossfire. He also hosted a public access program called Tucker Carlson: Unfiltered. He also produced a program at MSNBC called Tucker, but it was shut down after few seasons because of low ratings.

After joining Fox News as a contributor at Fox News in 2009, he regularly presented several programs and shows as a host or anchor.

FAQ: How old is Tucker Carlson?

FAQ: What is Tucker Carlson networth in 2020?

Quick Facts
Help us Edit this article and get a chance to win a $50 Amazon Gift card.
Last Modified: Sep 21 2021
You may also like
articles you may like