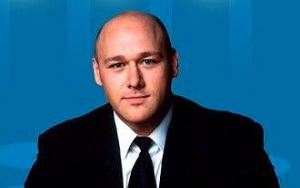 Will Sasso is known as a Candian comedian and actor. He is most famous for his role in the sketch comedy show, MADtv.

Will Sasso was born in Lardner, British Columbia. His parents were Italian immigrants. Will graduated from the Secondary School of Delta in British Columbia in the year 1993. He says that he was determined to be an actor. He grew up to respect comedy because of his addiction to television.

When Will Sasso was 15 years old, he got his first agent and started to book roles in films and television. He then moved to Vancouver, and Los Angeles, California. Before that, he acted for five seasons in Madison, an award-winning Canadian dramatic series as Derek Wakaluk

After the second season of Fox's sketch comedy show MADtv, the show experienced a high cast turnover. After the main performers Artie Lange, Orlando Jones, and Bryan Callen had exited the series in 1997, the casting executive of Fox sought replacements for the show. Sasso together with Aries Spears and Alex Borstein were chosen to join MADtv for the third season as members of the regular cast. Sasso became known for quirky characters like the accident-prone handyman named Paul Timberman, singer Michael McCloud, Eracist member Hugh and the host Ruie Peranio for Talkin’ American.

Will Sasso did many impersonations of celebrities which included impersonations of Bill Clinton, Steven Seagal, Chris Farley, and Arnold Schwarzenegger. He then began developing many network television projects for Touchstone, Disney, and ABC. He left MADtv to pursue the next stage of his career. Upon his exit from Mad TV, the show became known as "The House that Sasso Built and Bryan Callen hunkered in."

Many comedy fans remember Will as Curly in the 2012 film reboot of The Three Stooges. Sasso also appeared in movies and TV shows like Movie43, Henchmen, Doctor Who, Dawg, Dark Ride, and Best in Show.

Will Sasso is a huge fan of professional wrestling and made many appearances in pro wrestling promotions. Sasso worked a storyline with former world champion Bret Hart. Sasso appeared at ringside during the February 8, 1999 episode of WCW Monday Nitro, where Hart ambushed him. During Sasso's time in WCW, color analyst, Bobby Heenan would label Sasso as "Will Fatso". Sasso's impression of Steve Austin stunned the WWF so much that they requested him to appear on the February 7, 2002 episode of WWF SmackDown!, appearing close by Chris Jericho and Austin himself, as a way to promote Austin's MADtv appearance.

A podcast called the 10 Minute Podcast was hosted by Will Sasso and his comedian companions, Chris D'Elia and Bryan Callen. The podcast featured the trio doing stores of unreasonably fun bits, hopping into some silly characters, and impressions. After the podcast ended, Will would go on to make any memorable guest appearances on his comedy friends' podcasts like Bobby Lee on Tiger Belly.

Even though Sasso enjoys popularity, he did manage to keep his personal life private. He does not like to talk about his dating life.

FAQ: How old is Will Sasso?