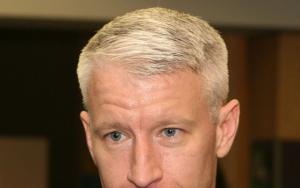 Given his high-brow family, Anderson was exposed to media at an early age. He appeared in Harper’s Bazaar when he was a baby. At 3 years old, on September 17, 1970, he appeared as a guest on The Tonight Show with his mother. From age 10 through 13, Cooper modeled for Ralph Lauren, Calvin Klein, and Macy's.

Cooper was only 10 years old when his father suffered a series of heart attacks and ultimately died while undergoing open-heart surgery on January 5, 1978. Ten years later, Cooper's older brother, Carter Vanderbilt Cooper, committed suicide by jumping from his penthouse apartment on July 22, 1988 at age 23. Cooper cites his brother's untimely death as one of the reasons he became interested in journalism. "I'd come to be a reporter. At least that was the excuse. The only thing I really knew is that I was hurting and needed to go someplace where the pain outside matched the pain I was feeling inside." He also credits much of his success to his father. "I reread his book, Families, probably once a year", he told New York Magazine. "To me it's sort of a letter from him to me and sort of a guide on... you know, how he would have wanted me to live my life and the choices he would have wanted me to make. So I feel very connected to him."

"[Those] are the two events that affected him at gut level", his mother remembers. "Later, when he became a reporter, it enabled him to do this with compassion and maturity way beyond his years. I've always thought that TV is like an X-ray. And when you see Anderson on TV, what you see is what you get. He really is like that."

Cooper studied at Dalton School, a private co-ed university preparatory day school in New York City. He graduated a semester early, at 17, and then traveled Africa for several months before returning to attend Yale University. "He wanted to go and I let him", his mother reports. "I knew it was in his nature to take risks, live on the edge."

While at Yale, he spent two summers interning at the Central Intelligence Agency. He majored in political science and graduated with a Bachelor's degree in 1989.

After graduating, Cooper attempted to gain entry-level positions with ABC answering telephones, but had difficulties transitioning to on-air reporting. While working for Channel One as a fact checker, Cooper forged a press pass to enter Myanmar and interview students that were fighting the Burmese government. He then sold these reports to Channel One. While in Burma, Cooper lived in Vietnam for a year to study the language at the University of Hanoi. After his previous success, he persuaded Channel one to allow him to film and assemble reports of Vietnamese life, which then aired on the network. He continued filming similar stories from Somalia, Bosnia, and Rwanda. His stories were seen by over 12,000 classrooms all over the nation when they were broadcast on the school television network of Channel One News.

In 1995, Cooper was hired by ABC News as a correspondent. He moved within the company, co-anchoring World News Now and later hosting the channel's reality show, The Mole. He occasionally filled in for Regis Philbin on Live with Regis and Kelly and often co-hosted with the duo.

Cooper left ABC and joined CNN in 2001, returning to broadcast news and leaving his position on The Mole. "Two seasons was enough", he explained. "And 9/11 happened, and I thought I needed to be getting back to news." He anchored alongside Paula Zahn on American Morning and, less than a year later, became CNN's prime-time weekend anchor. Since 2002 he has hosted CNN's New Year's Eve special from Times Square.

FAQ: How old is Anderson Cooper?

FAQ: What is Anderson Cooper networth in 2020?