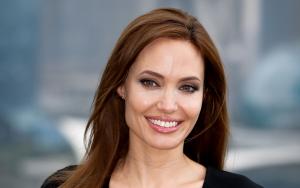 Voted as the world’s most beautiful woman, being named as the sexiest woman alive and being cited as one of the most influential and powerful people in the American entertainment industry; Angelina Jolie Pitt is a renowned American actress and humanitarian. She was born on June 4 1975, Los Angeles to actor Jon Voight and Marcheline Bertrand. After her parents’ divorce in 1976, Jolie and her brother James Haven lived with their mother. Her interest in acting grew when she used to watch films with her mother rather than being influenced by her father’s successful career. She first attended Beverly Hills High School, where she felt isolated and was teased around for being extremely thin and wearing glasses and braces. After being transferred to Monero High School she behaved like a ‘punk’ wearing black clothes and experimenting with knife play. She dropped acting classes to become a funeral director.

As a child, she had a hard time connecting with people and struggled with insomnia and drugs. When she turned 20, she had experimented almost every drug including heroine. Twice she struggled with suicidal temptations, at the age of 19 and 22. After adopting her first child, she found stability in her life. As an Oscar winning actress, her career did not have a healthy start as that of today. Though she appeared alongside her father in Lookin’ to Get Out (1982) at a young age of five, she had failed at modeling and had acted in only five of her brother’s student films. Her professional career began with her role as a human-robot assassin in Cyborg-2­. Her first Hollywood picture Hackers hit the theatres on 1995 but failed to make a profit.

After a series of music videos and failed attempts at creating a breakthrough, she played the character of George Wallace’s second wife Cornelia in George Wallace (1997) which was well received both by the critics and she won a Golden Globe Award. In 1998 for Gia she consecutively won another Golden Globe Award and Screen Actors Guild Award, and was also nominated for an Emmy Award. An academy Award for Best Supporting  Actress, her second Screen Actors Guild Award and her third Golden Globe Award came with Girl, Interrupted in 1999. Lara Croft: Tomb Raider (2001) made her an international superstar and launched her as a female action star. The 2005 starrer Mr. & Mrs. Smith was one of her most successful movies with a net collection of $478.2 million worldwide. With the tragic death of her mother in 2007 she began appearing in lesser films. By 2008, Jolie was the highest paid actress in Hollywood. She also voiced the animated movie Kung Fu Panda with its sequel Kung Fu Panda 2 released in 2011.

After two years, Jolie’s Salt (2010) emerged as an international success with revenues of around $293.5 million. Her 2010 starrer The Tourist failed to impress the critics but earned a respectable sum nonetheless. After a three and a half year leave from the screen, Maleficent (2014) became her highest grossing film with net collection of $757.8 million worldwide.

She has also been actively involved with UNHCR since 2001 and served as a UNHCR Goodwill Ambassador till 2012. Then, she was promoted to the rank of Special Envoy to high Commissioner Antonio Guterres, and represented him at diplomatic levels. She has visited Jordan, Lebanon, Turkey and Iraq to push for legislation to aid child immigrants and other children in both the U.S. and developing nations. For her humanitarian works she received the Humanitarian Award (2002), the Global Humanitarian Award (2005) and the Freedom Award in 2007.

Jolie was involved in a serious relationship while she was 14. Her next serious relationship was with actor Jonny Lee Miller and she married him on March 28, 1996. But some events led to their separation in September 1997 after which they divorced on February 1999. She then began a relationship with model-actress Jenny Shimizu in 1996 and it ended by 2005. Jolie was in a relationship with Billy Bob Thornton (May 2000 – May 2003). She is now married to Brad Pitt and the mother of six children among which she adopted three of them; Maddox Chivan (2002), Zahara Marley (2005) and Pax Thien (2007). She gave birth to her first child Shiloh Nouvel in 2006 and gave birth to two twins- son Knox Leon and daughter Vivienne Marcheline in 2008.

On 2013 at the age of 37, Jolie learnt that she had 87% risk of developing breast cancer due to a defective gene and thus she underwent preventive double mastectomy. Following this, she had reconstructive surgery involving implants and allografts. She never chose to keep her cancer story private because she thought she would be able to inspire any others to come up and have their gene tested.

FAQ: How old is Angelina Jolie?

FAQ: What is Angelina Jolie networth in 2020?