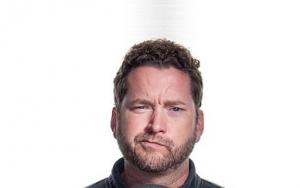 Burns was born in the Rochester, New York area and grew up in Houston, Texas. His father was a Physics professor who worked on the Desertron Super Collider. He is of one quarter French-Canadian descent.

Burnie studied film making, digital media and media production at Alief Elsik High School. After high school, he was accepted at the University Of Notre Dame but, unable to afford the tuition, he chose to attend The University of Texas at Austin, where he received a Bachelor of Arts in Computer Science and graduated with a Bachelor of Art's degree in Computer Science from The University of Texas at Austin. While there, Burns got his start in video production by volunteering at K29HW-D, Texas Student Television. During his time with TSTV, he founded Sneak Peek, the longest-running student television program in the world, in which he reviewed films and conducted interviews with guests such as Adam Sandler.

Burnie Burns' career began in 1997 when he attempted to create his own movie. He did this with the help of his roommates, Matt Hullum and Joel Heyman. They shot a film entitled "The Schedule" but did not distribute it. This was during his last year at the university. Later on, in 2002, Burnie worked with Gus Sorola and Geoff Ramsey to com up with a viral video, a parody of "Mac Gamer Switch".

In 2003, he continued to work with Sorola and Ramsey on a new project. They created voiceover-enhanced videos for drunkgamers.com. Burns also made a trailer for "Red vs. Blue" and posted it on the website. However, it did not receive much attention and the website was later closed. Burns later worked with Ramsey to bring back "Red vs. Blue", and the series has been going on to date. In 2004, Burns worked with Matt Hullum to create "The Strangerhood", a comedy web series, which was inspired by the game "The Sims". During the Machinima Film Festival in 2005, the series received an award for best editing. Burnie Burns, in 2005, worked with Rooster Teeth to create "P.A.N.I.C", a machinima science fiction series inspired by the video game " F.E.A.R". In 2009, he returned to live action with a mini-series entitled "Captain Dynamic" to help promote an online game, "City of Heroes".

After two previous and successful series, Burnie created mini-series Captain Dynamic which was based on game named City of Heroes. This series was written by Burnie and director was Matt Hullum. This led to creating the next series which title was Rooster Teeth Shorts. This series was a sketch comedy. Burnie’s more notable work was also as a producer and a host. He was one of hosts for audio podcast Drunk Tank. In 2010, he appeared as one of hosts of Immersion. He was producer of documentary movie based on game Minecraft. His work on 2010's Immersion earned him an IAWTV award for Best Hosted Taped Web Series.

He also appeared in a short movie Hit in 2015 and in movie The Outfield. Rooster Teeth launched campaign for movie Lazer Team in 2014, where Burnie was one of stars, producers and writers at this movie. The next year, he executive produced "RWBY", a web series. In 2016, Burns co-hosted a documentary entitled " World's Greatest Head Massage: An ASMR Journey" along with Gavin Free.

In 2017, Burns made a brief cameo in It's Always Sunny in Philadelphia as a bar patron with no lines. In September 2017, alongside Jenkins, he co-hosted the inaugural Purpose Awards, an expansion from the Streamy Awards.

He is currently an executive series of the cartoon web series "VaV" and the show "X-Ray".Burnie Burns'.

He was married to Jordan Burns in August 2000 and divorced in December 2011. He and his ex-wife Jordan Burns had two children together named JD and Theodore "Teddy" Burns.

Even when the separation was finalized, they did not talk about each other in the public. There are no details as to what Jordan is doing or who she is with, now. Only after the separation, he mentioned that he has two sons from the marriage. A lot of celebrities tend to keep their personal life to themselves, to avoid any rumors. This worked with Burns, a lot. There are no rumors that accused him of having an extramarital relationship with anyone.

FAQ: How old is Burnie Burns?