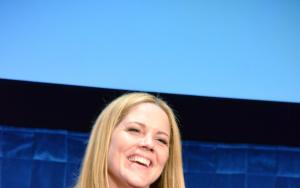 Mary McCormack is known as an American actress. She is most famous for her role in The West Wing.

Mary Catherine McCormack was born on February 8, 1969, in Plainfield, NJ.

Mary McCormack got married to Micheal Morris, a producer, in 2003. They gave birth to three kids together. Micheal Morris was found cheating on his wife with Katharine McPhee, an actress and former contestant on American Idol. A picture of them kissing each other started the beginning of the scandal. It was said that Howard Stern, Mary’s friend warned her about her husband's cheating ways three years before the picture got published. Howard insisted that Morris was having an affair, but Mary was too loyal to Morris to believe it.

Micheal and Mary's relationship started breaking to a point where they were seeing each other only once a week. Even at this point when Howard Stern came to her with bad news about her husband, Mary was very sure that Morris would not cheat on her. However, the truth was, Katharine McPhee, who got divorced from Nick Cokas was having a sexual relationship with Morris while he was still married to Mary.

Michael and Katharine were seen kissing each other in October but they got separated one month later in November. They met each other on the sets of a musical drama of NBC. They started flirting and holding hands within a few days. After the scandal became headline news, Morris wanted to end things with Katharine and start back his life with Mary, but Mary lost all her hopes of a trusting life with him. It was reported that she threw him out of their house. There were a lot of rumors about divorce. In an attempt to save the marriage, he tried to buy the cheating pictures before they were posted online but it was too late. He spoke about the pictures with Mary which caused her to get furious and throw him out of her house.

The pictures depict Michael and Katharine walking to the parking lot, locking lips in a passionate kiss. Mary said that she was a devoted partner and a mother and thought that the relationship was going perfectly. Things changed after a few months and the couple recovered. Mary and Morris were found walking side by side and the reports about their divorce stopped. Just five months after the cheating pictures, the couple was seen having dinner with celebrity friends including Sandra Bullock, Chris Evans, and Chelsea Handler.

Morris was wearing his wedding ring and there were no announcements of separation. It was assumed that they put the past behind them and started their new life. It is rumored that they got back together within a few days after the pictures came out.

Before Michael Morris, the only notable and serious relationship, Mary was involved was with Barnaby Harris. Harris was a stage manager. When she got the role in, ‘Private Parts’, she left Harris, her boyfriend, and moved to Los Angeles. They tried to maintain a long-distance relationship but it did not work for a long time. They were dating for three years when she left him and moved to Los Angeles.

Mary McCormack played the role of Deputy National Security Adviser Kate Harper in the popular political TV show, The West Wing. She also played Peggy in The Kids Are Alright and Justine Appleton in the series Murder One. She also had roles in True Crime, 1408, and Deep Impact.

FAQ: How old is Mary McCormack?

FAQ: What is Mary McCormack networth in 2020?