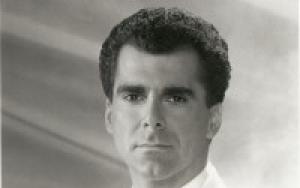 Carmelo Domenic Licciardello was born on January 19, 1956, in Trenton, New Jersey. Known by his stage name, Carman, he is a famous evangelist and contemporary Christian music artist. He is in many religious TV series like Carman: Celebrate Jesus, Time-2, and Carman's Reality Check.

As a child growing up in Trenton, New Jersey, Carmelo used to play drums. He started as a member of his mother's band and then formed a band of his own during his teenage years. Then, around the age of 20, Domenic moved to California on his own.

His evangelistic career started while attending an Andraé Crouch concert. It was at that moment when he became a born-again Christian. In 1980, he made an album titled God's Not Finished with Me. The following year, Bill Gaither invited him to a tour. Between 1987 and 1989, he was named Charisma Magazine's Readers' Choice for favorite male vocalist. In 1990 and 1992, Billboard recognized Carmelo's influence on Christian music by naming him the Contemporary Christian Artist of the Year. In addition, Carmelo holds the record for the biggest attendance for a Christian musical performance.

In 2008, many sources accused him of having many illicit affairs. A rumor about a romantic love triangle with Mario Murillo, Carmelo, and another woman named Oksana went on for about two years. Rumors even speculated that he was having a sexual relationship when he was in the ministry. His devoted fans refused to accept the fact that Carmelo would have a relationship out of marriage.

Facts proved none of the rumors to be accurate as no woman came forward and took responsibility. He was also rumored to have a relationship with Keli Miller, but there wasn't any strong evidence like all the other rumors.

Carmelo got married in 2004. His wife was rumored to be Rosa Licciardello, but she was never seen in the media and did Carmelo never spoke about her publicly.

The only rumored affair with some vital bits of truth was speculation that he was in a relationship with Patricia Manterola. At the same time, he was married to Rosa, and Patricia was married to Javier Ortiz. Patricia wanted Carmelo to file for divorce and talked about infidelity on Oprah. Patricia explained that in Mexico, if a man proves that his wife pushed him into adultery by not meeting his needs, then she loses her rights to alimony. She also added that infidelity was a cultural thing in Mexico, "In Mexico, there are high rates of infidelity for married men and women. If you're a woman getting a divorce on the grounds of adultery, your husband might not be held responsible if he says you didn't meet his conjugal rights. If a woman is held responsible for 'pushing' him to adultery, she loses the right to receive alimony forever."

Patricia's words sparked a public outcry as people speculated that she was referring to Rosa and was blaming her for her husband's behavior and adultery. Almost immediately after the interview, Patricia's fame skyrocketed through the ceiling. Some say that Carmelo did not want to get involved with her initially. However, Patricia tried to attract him whenever she got the chance. When she could not seduce him, she falsely announced that Carmelo was her boyfriend to cause controversy and disrupt his marriage with Rosa.

FAQ: How old is Carman Licciardello?

FAQ: What is Carman Licciardello networth in 2020?