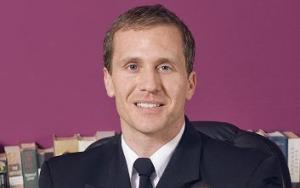 A former Navy SEAL and politician, Eric Robert Greitens, served as the 56th governor of Missouri from January 2017 to June 2018. He resigned amid allegations of sexual misconduct and inappropriate campaign spending.

Eric Greitens was born on the 10th of April 1974 in St. Louis, Missouri. He is the son of Rob and Becky Greitens. His family are Jewish. He is an author and currently the Governor of Missouri. He won the election in 2015 as the Republican candidate against tough oppositions. Eric Robert Greitens can be said as the epitome of a true war hero in many ways. He was born to a family that we could say is not predominantly wealthy and polished through school; there was every likelihood that Eric Greitens could have impeccably combined into the crowds and lived out his life well, minus ever being the figure of valor and hope, which he is now.

He started his high school at the Parkway North High School. He was named as a member of the All-USA Academic Team in 1995. He was a Scholar of Angie B. Duke at Duke University and studied philosophy, ethics and public policy. He was nominated as Rhodes and Truman Scholar in 1996 after graduation from Duke University. He also enrolled at the Lady Margaret Hall, an integral college of Oxford. In 2000 at the University of Oxford, he got a Doctor of Philosophy in development studies. At the Harry S. Truman School of Public Affairs, he is a former senior Fellow. He taught classes at the Washington University in St. Louis and the University of Missouri in time past.

In January 2001, he attended the Naval Officer Candidate School after graduating from Oxford University. After this, he started his Basic Underwater Demolition Seals and finished in Coronado, California, with Class 237 in February 2002. Currently, he is a lieutenant commander in the U.S. Navy Reserve and was deployed to Iraq, the Horn of Africa, Afghanistan and Southeast Asia four times. He also served as a Mark v Special Ops Craft detachment commander, a joint special Ops task unit commander and an al Qaeda monitoring cell. This gentleman has won several awards during his army career, including the Purple Heart, Bronze Star, Navy Commendation Medal, Joint Service Commendation Medal, Navy Achievement Medal, Military Outstanding Volunteer Service Medal, and the Combat Action Ribbon.

The former President of the United States of American, George W. Bush, in 2005 appointed him to serve as a White House Fellow. He worked as the White House Fellow in the Department of Housing and Urban Development and came up with a new program to help rebuild after Hurricane Katrina. The program was called the universities Rebuilding America Partnership. This was a $5.6 million effort to involve construction and manufacturing students in the continuous effort to re-erect New Orleans. Throughout his time as a White House Fellow, he also co-established the "President's Higher Education Community Service Honor Roll Program."

After returning from Iraq, he used two of his friends' combat and disability pay to begin the Mission Continues. This group or organization aimed to ginger veterans in serving and leading in communities across America. This got a lot of commendation from other people. The Mission cheers veterans to heal themselves via public service through the engagement of volunteer organizations throughout the country. The CLASSY award was given to this organization in 2014, identifying its usefulness in veteran services and active-duty and veteran services. In July 2014, he stepped down as CEO of the organization and one year later, he resigned from his position as part of the board of directors. He worked without pay as the CEO of the Mission Continues from 2007 to 2008. But was compensated between $150,000 and $200,000.

Sheena Elise Chestnut was Greitens' wife from 2011 to 2020. There are two children in this family. In 2015, while still married, Greitens had an extramarital affair with his hairstylist.

To put it another way, she was accused of being bullied into having oral sex with him by threatening to expose herself in a nude photograph if she told anybody about their experience. Greitens claims that the 2018 report of the Missouri House Special Investigation Committee on Oversight, which decided that the woman's allegations were credible, has been discredited.

After being held up in a coffee shop in the St. Louis region, Sheena Greitens was robbed by two men brandishing guns in December of 2016. She was completely unscathed. Three teenagers, ages 14, 15 and 19, were arrested as a result of the inquiry. "The men and women of law enforcement found these young gentlemen before I did," Eric Greitens remarked at the time. Following the incident, Captain John Hotz of the Missouri State Highway Force declared that the patrol will begin protecting Sheena Greitens. However, Governor Hotz's security detail did not commence until after he was sworn in, after the election, when the patrol was able to offer immediate protection for the newly elected governor.

On April 11, 2020, Eric and Sheena Greitens announced their separation in an official statement.

FAQ: How old is Eric Greitens?

FAQ: What is Eric Greitens networth in 2020?