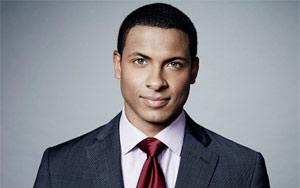 Errol Barnett is known as an American journalist. He is most famous for his work on CNN and CBS.

Errol Barnett was born in Milton Keynes, England, to a Jamaican father, Michael Christie and an English mother named Pamela. Although Michael is Errol's biological father, Errol got his last name from his stepfather. After his parents got divorced, his mother tied the knot with Gary Barnett, a US Air Force sergeant who served in the Gulf War. The family then moved to Phoenix, Arizona.

Barnett's first school was the Garden Lakes Elementary School. He then attended Westview High School, a public high school in the city of Avondale. In 2008, he graduated from the University of California, Los Angeles with a bachelor's degree in political science with a special focus on international relations. He was a member of the business fraternity, Alpha Kappa Psi.

In 2001, Barnett started his career in journalism before attending college when he was only 18 years old. What started as a hobby in his spare time, he never expected to do for a living. He stated in an interview, “In high school, I was able to produce my own TV show on campus. It was just for fun. I never thought I’d have a career or work in TV. Channel One News had made him the youngest reporter and anchor for their in-school program, the Student Produced Week in Los Angeles.

In May 2019, Errol Barnett got married to Ariana Tolbert in Jamaica. Jamaica was picked as a special location because Barnett's grandparents are from there. The couple shared written vows at the function as Tolbert's mom and father, Patricia and Otis Tolbert, sat in the front row. Tolbert's maid of honor and sister Sabrina directed the pre-marriage ceremony and Barnett's brother, Danny filled in as his best man.

Errol Barnett spent five years at Channel One covering many important stories like the 2004 Democratic National Convention, the September 11 attacks in 2001, and the Lily and Ivan hurricanes. He also did a brief stint at ReelzChannel in the role of anchor and correspondent. Another one of his notable achievements was a two-part series about increased heroin usage in the suburbs, “I interviewed a heroin user, this 18-year-old, who was going through rehab. And I was there in rehab with him. He’s twitching and he has the track marks. I thought it was a really compelling story”.

Barnett was chosen as one of Teen People magazine's “20 Teens Who Will Change The World” for his early work at Channel One. “I learned so much about the size and diversity of America”, he wrote in his official biography. “The money I made allowed me, as a first-generation college student, to earn a political science degree at UCLA.” He left Channel One in 2006 to attend UCLA.

FAQ: How old is Errol Barnett?

FAQ: What is Errol Barnett networth in 2020?