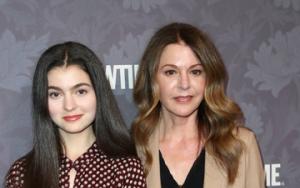 Who is Jane Leeves?

Jane Leeves is an English actress, model, producer, singer, comedian, and dancer who was born on April 18, 1961, in Ilford, Essex, England, in the United Kingdom. She grew up in Crawley, West Sussex and East Grinstead, West Sussex. Leeves took ballet lessons from a young age at the Bush Davies School of Dance. She worked as a model after having to give up her ballet career due to an ankle injury. Leeves made her film debut in "Monty Python's The Meaning of Life" and went on to become a regular on "The Benny Hill Show" as one of Hill's Angels. In 1993, Leeves was cast in a television series called "Fraiser" where she played Daphne Moon.

Leeves became pregnant during the eighth season and her pregnancy was incorporated into the show. Leeves has also voiced numerous characters in animated films such as "James and the Giant Peach" and "The Penguins of Madagascar". In 2010, Leeves appeared in two episodes of the ABC television series "Desperate Housewives" where she played Lynette and Tom's therapist, Dr. Graham. She married a CBS Paramount Television executive named Marshall Coben in 1996. The couple has two children together and currently live in Los Angeles, California.

FAQ: How old is Jane Leeves?