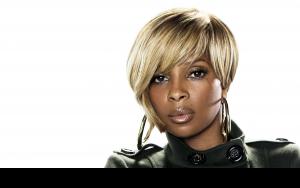 Mary Jane Blige was born on January 11, 1971 in Brooklyn, New York. Mary J. spent her early childhood in Richmond Hill, Georgia where she sang in the Pentecostal church. Mary J. later moved back to New York with her family spending her formative years in the Schlobohm Housing Projects located in Yonkers. Mary J. said she dreamt of being on stage as a child but thought the idea was too far-fetched because of the neighborhood she lived in and that she believed that it was something that would never happen. Mary’s mother was a nurse by profession and her father was a jazz musician who left the family in the mid-1970’s. Her mother was an alcoholic and her father suffered from post-traumatic stress disorder from his time served in the Vietnam War. Mary J. never finished high school, dropping out in her junior year.

Blige began to pursue a musical career and in early 1988 recorded a cover of Anita Baker’s “Caught up in the Rapture”.   Her mother’s boyfriend at the time played the tape for Jeff Redd, a recording artist for Uptown Records. Redd liked what he heard and sent the tape to the CEO of his record label, Andre Harrell. Harrell met with Blige and signed her to the label making her the company’s youngest and first female artist. So while Mary J. thought it would never happen, happen it did as Mary Jane Blige went on to write music about growing up hard in the inner city; music that has touched the hearts of fans all over the world.

Mary J. Bilge’s work was described at the Billboard awards by Puff Daddy in the following way:  “for almost twenty years she has been writing music that both cuts us and helps us heal at the same time.” He goes on to say “Her realness in music, her swagger in style, her energy in performance, make her loved by millions.”

After signing with Uptown, Mary J. began working with Puff Daddy, who became her executive producer and worked with her on her first album titled “What’s the 411?” which was released in July of 1992. “What’s the 411?” was received positively by critics and the public alike as it reached number six on the Billboard 200 list and the top of the R&B/Hip-Hop Albums chart. Dave McAleer, author or co-author of over forty music books, listed Blige as the United States’ most successful new female R&B artist of 1992. “What’s the 411?” got its name from Mary J.’s former work as a 411 operator and established her as an accomplished storyteller with Tom Moon of Rolling Stone magazine penned that Blige had a “tough girl persona” and “streetwise lyrics.”

With sales of the album and singles from the album combining to reach more than five million copies, Mary J. became the best selling female artist on the Uptown label. Mary J. recorded her second album “My Life” in the winter of 1993. The album, which was released near the end of 1994, debuted as number two on the U.S. Billboard 200. “My Life” sold nearly half of a million copies in its first week and remained the number one album on the Top R&B/Hip-Hop Albums chart for eight weeks. In 2002, “My Life” was ranked number 57 on “Blender’s” list of the greatest 100 albums of all time and in 2003, Rolling Stone put it at number 279 in its own list of the 500 Greatest Albums of All Time.