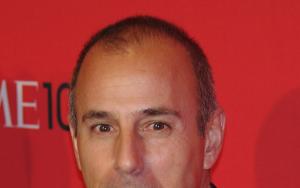 Matt Lauer is an American Television journalist widely known for anchoring The Today Show on NBC.

Background
Matt Lauer was born as Matthew Todd Lauer in New York City. He was raised as Romanian Jew by his parents. He graduated from the School of Media Arts and Studies at Ohio University and got his undergraduate degree when he completed his studies.

He had dropped out of university in 1979, but the university awarded him the remaining credits by taking in his journalism experiences as an independent study. It was a unique situation that was afforded to Matt because of accomplishments in the media industry.

Broadcasting Career
Matt had been working with NBC since starting with them in 1996. Before he joined NBC, he did various reporting jobs with major well known news agencies like ESPN, HBO Entertainment News, and PM Magazine.

Lauer embarked on his television career in the 1979, when he produced the 12 News Hour in WOWK-TV, a station located in West Virginia. He later started moving around and worked in many places including Boston, Philadelphia, and Richmond. He has hosted shows at WNEW-TV in New York City and also WNYW-TV. He also hosted the show Talk of the Town in 1988.

His other shows include the three hour live show WWOR-TV’ s 9 Broadcast Plaza, which he did for three years and the’ Day in Court’ show of Kushner -Locke Company, which was later renamed as Trial Watch and ran for two seasons on the NBC Network. Lauer then moved on to WNBC-TV where he anchored the Today weekday news show with Jane Hanson. He also hosted the ‘Live at Five’ show with Sue Simmons until 1996.

His show ‘Where in the World is Matt Lauer’ on Today started in 1998 and it was a very popular one. He also anchored the show, The Greatest American on Discovery Channel, which had voting done by viewers via internet and telephone to be chosen as the winner. He also co-hosted the live coverage of Macy’s Thanksgiving Day Parade on NBC. He interviewed Prince William and Harry in 2007 and also appeared in the ‘Land of the Lost’ movie as himself. He struck a new contract with NBC News in April 2012, the contract terms stated that he would be getting $25 million annually.

Rumors suggest that he was the main reason behind the exit of co-host Ann Curry from the Today Show but the rumors were proven to be false later. It was revealed that the executive producer of the show Jim Bell was behind Curry’s exit in what was named as ‘Operation Bambi’. Lauer had actually tried to stop her ouster.

Personal Life
Matt Lauer married Nancy Alspaugh, a television producer in 1981, but later divorced her in 1988. He then dated Kristen Gesswein, a newscaster. It was a compatible union because they both came from the same working environment. They didn’t have to deal with insecurities or uncertainties about each other’s jobs because they were well aware of the demands that their careers required. They got engaged briefly, but separated later on before they actually got married. They thought that had found something with each other but it ended up being a fleeting love affair. They realized that what they had built was not a strong enough foundation for them to be happy in the future.

FAQ: How old is Matt Lauer?