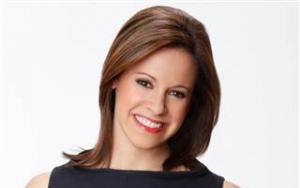 Jenna Wolfe is NBC Today’s national correspondent and has been the news anchor for Weekend Today since October 2012. She covers feature stories for the top rated morning news program in . She also does some weekday news programs occasionally.

Jenna Wolfe created a stir in March 2013, when she announced that she was gay and that she and her girlfriend Stephanie Gosk were expecting their baby in August. Stephanie Gosk is a fellow NBC journalist. The disclosure of their secret affair came as a big surprise. Jenna revealed that they were seeing each other for the past three years and would be married soon. Born in 1974, in , Wolfe spent her early life in , before she moved on to the in the year 1989. She graduated with Bachelor degrees in both English and French at the SUNY, .

Wolfe started her career at NBC News in 2007 and was co-anchor of the Weekend Today Sunday Edition for five years till 2012. Before her entry into NBC, she was with WABC, as anchor and sports reporter. She also did a brief stint as anchor and reporter for MSG Network. She worked as host for the flagship venture of MSG, ‘MSG Sports Desk’. Her career in journalism started in 1996, when she worked for WICZ, . She also worked for WUHF and WPHL for a short period of time as sports reporter.  She had earlier worked with NBC Today as a summer intern during her college days. She was demoted from her post as co-anchor of NBC Today Sunday show, when Erica Hill replaced her taking over the weekend slot. But later in October 2012, she was reappointed as anchor of the Weekend Today show.

Jenna is a feisty personality and her background is equally interesting. She speaks Creole and French fluently and knows Spanish too. She is a daring and adventurous reporter not afraid of crossing the line when it comes to reporting her stories.  She likes playing racquet ball, volleyball and loves skydiving and water skiing. She spends her free time enjoying adventurous sports and training at the gym. She is passionate about maintaining her health and fitness and hates Pizza.

Jenna Wolfe is an avid movie enthusiast and an ardent Seinfeld devotee. She resides at present in with her girlfriend Stephanie Gosk, who works as foreign correspondent at NBC.

FAQ: How old is Jenna Wolfe?