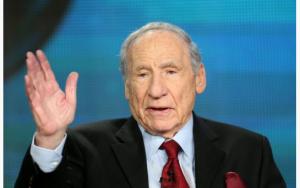 Mel Brooks is an 88-year old American actor, director and screenwriter and is one of the only people alive on this earth to have received the Grammy, Oscar and Golden globe awards. He was also widely regarded as one of the best comedy film makers of the previous century and even made a few parodies which did modestly with Young Frankenstein and Robin Hood: Men in Tights. His personal life mostly consisted of two ladies, leaving aside his other rumored affairs common for any celebrity.

He reportedly started dating her first wife, Florence Baum when both were 20-year old, after his girlfriend went off to Europe for the summer who was incidentally, Florence’s friend and she was the one who helped Mel through his difficult times and then eventually married in 1951. Florence was reportedly a dancer who danced in the Broadway show, before their marriage. Soon after, both had their first kid in the form of a daughter Stefanie and Nicky, the very next year. After a gap of 2 more years, they had their third child together, this time; it was a son who was named Eddie. Mel’s career started blossoming at the same time and that somehow took a tool on their relationship. In an interview for a major magazine, Mel even said that they were too young when they got married and problems started showing after their three kids started to grow and both couldn’t get along as individuals. They eventually had a mutual divorce.

After a 10-year old marriage that ended on a mutual and cohesive note, nobody expected the comedy man to marry anytime soon, given his previous experience. However, he proved everybody wrong as he married actress Anne Bancroft, in 1964. Anne Bancroft didn’t really have a clean history either as she had been rumored to be dating yesteryears actor Scott Brady and then dated Martin May in 1952 and eventually married him on 1st July, 1953. The couple got divorced in February, 1957 thus ending a 2-year old relation. Anne and Mel were reported to have met at some function and hit off quite instantly. Some even seemed to say that she was the reason behind the breaking of Mel’s previous marriage with Florence but those were soon brushed aside and the media hardly looked into that matter with keen interest.

Anne and Mel married in 1964, after a probably relationship lasting a year. With a scarred history and an ever-gleaming and gradually growing career for Brooks, chances of the relationship lasting long weren’t high. But Mel Brooks proved everyone wrong once again as their relationship went on smoother than anybody had ever anticipated. They were also seen at red carpet events and various movie premieres next and the fact that his three children with Florence stayed with their mother helped his 2nd marriage to prosper. Mel and Anne had their first child in the form of a son, whom they named Max. They continued to be in a relation before Anne died of uterian cancer in 2006, thus ending a 41-year old married relation. An 88-year old Mel still continues to live, with his four children.

FAQ: How old is Mel Brooks?