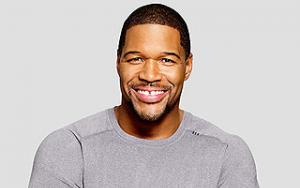 Michael Anthony Strahan was born on November 21, 1971, to Gene Willie Strahan, a Major in the US Army & Louise Strahan. Michael’s mother was a Basketball Coach, his father was a boxer & his uncle Arthur was a retired Pro-Football player. Michael played organized football at Mannheim American High School, Germany, where his father was stationed before moving back to the US.

Before the summer of high school, Michael’s father moved him to Uncle Arthur’s place in Houston so that Michael could attend the Westbury High School where his single game was enough to win him a scholarship to Texas Southern University. Michael following his Uncle’s lead began playing as the defensive end for Texas Southern University. Michael continued to dominate the field with his incredible strides, barraging through the attacking opposition lines, petrifying the talented quarterbacks.

As his biography reveals, Michael was soon turning into a potential NFP prospect during his college years. His tackling tactics were so famous that he was named Black Defensive College Player of the Year in 1991. He made the amazing record of 41.5 career sacks at Texas Southern, which is still considered one of the best.

By the senior year of college, Michael’s play had caught the eye of many NFL selectors & at the spring of 1993, Michael was selected by the New York Giants. After a couple of games, Michael played in just 9 games owing to his injuries & he missed two playoff games as well. After a couple of not-so-good seasons, Michael registered his first two digit sacks, 14 sacks, in 1997, earning him a ticket to the Pro-Bowl. What followed, for almost a decade, was Michael’s dominating defensive onslaught for the New York Giants. After his 1998’s 15-sack domination, Michael set the single-season record in NFL of 22.5 sacks in 2001.

He eventually went on to compile a total of 141.5 quarterbacks giving him the 5th rank in NFL history. After contemplating retirement in 2006, Michael, now a veteran bounced back in 2007 for Giants where he along with Eli Manning led the Giants to its 1st ever Super Bowl Victory after a long spell of two decades. The win was upsetting as Tom Brady & the undefeated New England Patriots were their opponents & the New York Giants were the underdogs.This happened to be Michael’s final game & he announced his retirement by giving a touching byte to the reporters.

Post-retirement the 6’5” athlete went on to become a Football analyst featuring in TV shows like Live! With Kelly & Michael, NBC’s Today Show, Good Morning America & is currently on Fox NFL Sunday. He had produced a short-lived sitcom on Fox called Brothers.He was elected to the Pro Football Hall of Fame on the 1st of February 2014.Michael has married three times & had 2 divorce s. His first wife was Wanda Hutchins with whom he had 2 children & his second wife was Jean Muggli with whom he had twin daughters. In 2006, he gave divorce to Jean Muggli & in 2009 got engaged to Nicole Mitchell who is Eddie Murphy’s ex-wife.

His current net worth is $100 million & rakes in $20 million pa as hosting fees.

FAQ: How old is Michael Strahan?

FAQ: What is Michael Strahan networth in 2020?