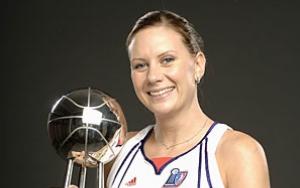 Penelope Jane Taylor is a former professional basketball player and assistant coach from Australia. Taylor spent most of her 19-year career with the Phoenix Mercury of the WNBA, winning three titles. She also played in China, Italy, Turkey, and Russia and won the WNBL with her first club, the Australian Institute of Sport. Taylor earned two Olympic medals as a member of the Australian women's national team and led the Australian Opals to a gold medal at the World Championships, winning tournament MVP ahead of colleague Lauren Jackson.

Penny Taylor was born on May 24, 1981, in Melbourne, Australia. Her parents are Denna Noble and Michael Taylor. They have two other children, Heather and Phillip. She started playing basketball when she was four years old. Her parents put her in the Belgrave South Red Devils and eventually the Nunawading Spectres. Taylor finished Upwey High School in Upwey and later graduated from the Australian Institute of Sport.

Taylor married Rodrigo Rodrigues Gil, a Brazilian volleyball player, in 2005; however, the couple eventually divorced. On May 13, 2017, she married Diana Taurasi, a fellow Phoenix Mercury star. Taylor gave birth to their first child, a son named Leo Michael Taurasi-Taylor, on March 1, 2018. Taylor's second kid, due in October 2021, was announced on July 26, 2021. Taylor gave birth to her first daughter on October 9, 2021, with Taurasi by her side, just hours after playing the Las Vegas Aces for a position in the 2021 WNBA Finals in Las Vegas.

Between 1997 and 1998, Taylor played for the Australian Institute of Sport. Then, she played in the WNBL for the Dandenong Rangers from 1998 to 2002. In 1999, she won a title with her club. In the next two seasons, she was named the WNBL MVP. For the 2014-2015 season, she signed with the Rangers, an Australian team. She returned to her home country after twelve years to be closer to her family, significantly closer to her father and nephews. Taylor went on to play for the same team in the 2015/2016 season. She also prepared herself for the 2016 Summer Olympics. In a match versus Sydney Uni Flames, Taylor had an injury, where she hurt her ankle eight minutes before the end of the game. Many fans claim that her team lost due to the fact she wasn't on the court.

In her WNBA career, Taylor played for the Cleveland Rockers for three seasons, starting in 2001. In 2004, she was signed by the Phoenix Mercury. In 2007, Taylor, together with Cappie Pondexter and Diana Taurasi, led their team to the championship game of the WNBA. In the final series, they defeated Detroit Shock to become the champions. She had surgery during the 2009 season, so she was absent during the first half of the championship defending season. In 2012, she had another injury and had three surgeries. In 2014, she spent the first half of the year recovering but returned in the second half. Taylor didn't play in 2015 due to personal reasons.

Since 2002, Taylor has been a member of the Opals, Australia women's national basketball team. That same year, she got a FIBA World Championship for Women's Bronze medal. In 2006, she was named the Most Valuable Player in the championship and won the FIBA World Championship for Women held in Brazil. Taylor is well-known for winning silver medals in Beijing in 2008 and Athens in 2004. Before the Summer Olympics in 2004 in Athens, Taylor posed nude in Black+White, an Australian magazine. This magazine presented nude athletes and was treated as controversial by some people, but others saw it as art.

FAQ: How old is Penny Taylor?