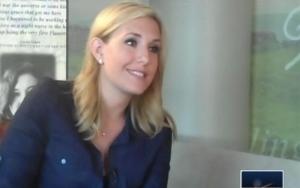 Poppy Harlow is known as an American journalist and news anchor. She is most famous for her work at CNN and Forbes.

Katherine Julia Harlow was born in 1982, in Minneapolis, Minnesota. She was attracted to journalism at a very young age and was determined to be a successful journalist.

Poppy Harlow got married to Sinisa Babcic. They declared that they were giving birth to a daughter in November 2015.

Poppy Harlow has worked as a business correspondent for CNN, Forbes.com and CNN International. Her career reached a new height after she started working for CNN in 2008. Her reputation was established even more when she started expanding her work to CNNMoney.com and HLN. She was made the New York based correspondent of CNN in the year 2012.

Harlow began her career as an intern at CBS, while she was studying in college and after her graduation, she continued to work at CBS for the show ‘Market Watch’. She also served as an assistant producer for the show Newspath at CBS.

During her stint at NY1, she provided top news coverage of regions including Staten Island and New Jersey. She was an expert in local governmental issues, economy and culture events. In 2007, she was then enlisted by Forbes.com to handle the duties of their video network. She started covering events in fashion, entertainment, and business

In 2013, she was in the news for controversially sympathizing with some convicted rapists when she was covering the Steubenville rape case involving two high school football players. She stated how sorry she felt for them for throwing away their lives and ruining their chances at a career in professional football. Her comments drew a lot of backlash from the public and she has since apologized. She was accused of sympathizing with the rapists instead of the victim, but Harlow later clarified her stand.

She won the Gracie Award in the year 2005 for the best online investigation program and SABEW’s Best in Business award. Harlow has covered several major business news stories internationally and her reporting included the Davos World Economic Forum in Switzerland, the annual meeting of Warren Buffet’s Berkshire Hathaway, Brainstorm conferences of Fortune, the North American International Auto Show, and South by Southwest.

Harlow is also a public speaker at various industry events. She also devotes her time to educate and inspire young school and college students who aim at becoming journalists. At college campuses, Poppy Harlow brings her talk"American Opportunity" to the stage in an engaging speech about social issues like pay equity across race, sex, and financial class. She recounts stories from her interviews with the world's top CEOs and shakers in the business.

FAQ: How old is Poppy Harlow?