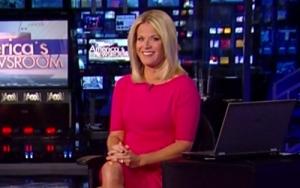 Martha MacCallum is a native of New Jersey. She was born in January 31, 1964 and is the daughter of Elizabeth B. and Douglas C. MacCallum Jr. Upon graduation from Ramapo High School in Franklin Lakes NJ Martha studied at St. Lawrence University, where she received her bachelor degree in Political science. Her interest in theatre made her join the Circle in the Square Theatre School. She later founded the Miranda Theater Company situated in New York. She is married to Daniel John Gregory. They married in the year 1992. They have a daughter and two sons and reside in Ridgewood, New Jersey.

Before starting her career in journalism, MacCallum was a corporate relations associate at Dow Jones Company. Even though numerous rumors have been floating about Martha MacCallum divorce with Daniel John Gregory; no such rumors have been substantiated. The couple is reportedly in love with each other and no official reports of divorce have been publicly filed.

MacCallum started her career at the Corporate Finance magazine as a reporter and later joined the Wall Street Journal Report first as a business news correspondent and then later as an anchor. She also hosted the shows World Market Outlook, Business USA and The Wall Street Journal Report for five years from 1991 to 1996. Martha MacCullum later shifted to WBIS-TV where she worked as a sports reporter and then as a business anchor. She later moved on to CNBC. She was a regular contributor for many shows on CNBC World and also contributed to the show ‘Today on NBC’ and ‘The News with Brian Williams’ show on MSNBC.

She also worked as co-anchor for the show ‘Morning Call’ with Martha MacCallum and Ted David, and Checkpoint at CNBC. She joined Fox channel in 2004. She was named the host of a new program, The First 100 Days on Fox News Channel.

While working at Fox News Channel, MacCallum provided coverage on many important events including the birth of the royal child in London, the presidential elections of 2004, 2008 and 2012, and the royal wedding. She co-anchored the coverage of the visit of Pope Francis to the United States and covered the funeral of Pope John Paul II. Martha has also covered national disasters such as Hurricane Katrina. Martha MacCallum has interviewed many high profile personalities including President Barrack Obama as well as the former strategist for President Obama, David Axelrod. She has also conducted interviews with Governor of New Jersey, Chris Christie, General David Petreaus, John McCain and Laura Bush as well as countless others who have been featured on MacCallum’s television shows on the Fox network.

MacCallum has received many awards and recognitions for her work as a journalist including the American Women in Radio and Television award that she won twice, once in 1997 and then again in 2003. She also appears as a frequent guest on the late night show ‘Red Eye with Greg Gutfeld, which is a satirical show and also on the show ‘The O’Reilly Factor’ along with host Bill O’Reilly.

Martha has a height of 5 ft 4 inches and her weight is 65 kg; in addition to that, she has a beautiful pair of blue eyes and striking blonde hair. Furthermore, her other body measurements include a 36 inche bust, a 24 inch waist, and a 36 inch hips size. Because of this she was lumped into the classification “Blonde Barbie Dolls” in an article written by the cartoonist and political commentator David Horsey for the Los Angeles Times. In her response to this MacCullum responded as follows:

“Mr. Horsey has no idea what it is like to be part of this network. We work hard, get our stories right and are proud of what we do and the success we’ve achieved. We’re experienced journalists and reporters, most of us have been at it a long time. Between us, we’ve worked at all the networks and most prominent newspapers and publications. We’re proud that our “lineup” is “stocked” with some of the sharpest, brightest women in the business.” And follows up with “Our success is not about hair color or skirts. It’s about elbow grease, dedication and sacrificing time with our families and friends. We are fine with that, it goes with the territory.”

FAQ: How old is Martha MacCallum?

FAQ: What is Martha MacCallum networth in 2020?