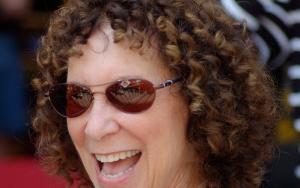 Rhea Perlman was born in 1948 and she is an American actress who is well known because of her role in Carla Tortelliin the Sitcom called Cheers. She got four Emmy Awards for this role. Rhea Perlman was born in New York to Adele and her husband Philip Perlman. He was an actor at the same time toy part and doll salesman. He played as barfly Phil on the Cheers. Heide Perlman, her sister, is a story editor, writer and producer at a television shows Frasier and Cheers. Rhea Perlman went to Hunter College in New York and she is a democrat. She started her career in acting when she played in Hot Dogs for Gauguin in 1972. She stared in the same year in the Westbeth Playwrights Feminists Collective production called an Uppity Revue with Danny DeVito who became her husband afterwards.

Rhea Perlman started her career in acting from 1970s and she appeared on different short and TV films. However, the best role played was playing in the show called Taxi where she was the girlfriend for Louie DePalma played by Danny DeVito.

During the year 1986, Perlman became the star for the Wedding Ring, the story from Amazing stories from Steven Spielberg. DeVito starred in the movie as well as her husband.

She has written many children books under the name of Otto Undercover. She has written at least six books up to now. These books are Brain Freeze, Brink of the Ex-stinka-tion, Toxic Taffy Takeover, Water Balloon Doom, Canyon Catastrophe and Born to Drive.

Rhea Perlman stared in different motion pictures and movies like Grandmother’s House We go, A Place to Be loved with In Spite of Love. The motions pictures she played are There Goes the Neighborhood, Matilda, Sunset Park, Carpool and Canadian Bacon. She played also in Love Comes Lately and 10 Items or less. She had a guest appearance in Becker while she also appeared in the sitcom the Pearl.

She met her husband Danny DeVito in 1971 and they started to live together after two weeks. They got married in 1982 and they had three children.  They have acted in many movies together as a husband and wife. They were said to separate in 2012 but in 2013, she reported that they reconciled. They live in California, Beverly Hills and they spend the vacation in New Jersey. DeVito, Perlman and the filmmaker Jonathan Demme works in the steering committee or Friends of Apollo in the theater called Oberlin in Ohio.