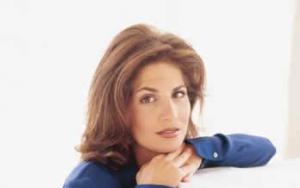 Rudabeh Bakhtiar, commonly known as Rudi Bakhtiar, is an American television producer and journalist who works in the field of journalism. She is a producer for Reuters in Washington, D.C., where she lives. Among her most prominent roles are those as host of CNN Headline News Tonight, Anderson Cooper 360, Voice of America, and Reuters News, among other programs.

She was born in Fresno, California, on June 21, 1966, to Iranian immigrants of Bakhtiari heritage as Rudabeh Carleen Bakhtiar. Her father passed away in 2005 due to oropharyngeal cancer. Bakhtiar has two younger siblings, one brother, and one sister. Bakhtiar is the eldest of the three children. Rudi Bakhtiar's father is Shapour Bakhtiar, the last Iranian Prime Minister under Shah Mohammad Reza Pahlavi; Bakhtiar's great aunt was the Shah of Iran's second wife Sardar Jang is Bakhtiar's ancestor's given name. grandfather's

She graduated with a Bachelor of Science in biology from the University of California, Los Angeles, in 1990, with the goal of pursuing a career in the dental field. Even though she had been accepted into the New York University Dental School, she was apprehensive about attending. She also attended the Career Discovery Program at the Harvard School of Design, where she studied architecture.

When Bakhtiar joined CNN in 1996, she took on a range of responsibilities, including hosting CNN Headline News Tonight on the CNN Headline News network, throughout her nine years on the network. Since joining Anderson Cooper 360, she has worked as a dedicated journalist, and she has also co-anchored CNN's Emmy-nominated CNN Newsroom. She has worked in a variety of countries in Europe, Africa, and the Middle East, including Rwanda, Ethiopia, South Africa, Iran, Israel, and Palestine, to name a few.

During the terrorist attacks on September 11, she also served as the anchor for CNN's Headline News program. She had resigned from her position as a television news anchor after nearly ten years to care for her ailing father.

Bakhtiar joined Fox News Channel as a general correspondent in January 2006, where he covered major international news events such as the Ahmadinejad-al-Maliki summit in Tehran in September 2006 and Saddam Hussein's trial and execution later that year. Bakhtiar has also covered major domestic news events, such as the election of Barack Obama as president of the United States in November 2008. After filing a sexual harassment complaint against then-Fox Washington Bureau Chief Brian Wilson in 2007, Bakhtiar's contract with the network was terminated.

As the Public Affairs Alliance of Iranian Americans' first director of public relations, Bakhtiar was instrumental in ensuring that Iranian Americans have a more inclusive and representative voice in the public and political spheres. She worked there as a producer of "Profiles of Iranian Americans" minidocumentaries centered on the lives of accomplished Iranian Americans. Her strong stance on Iran's human rights abuses led to her expulsion from the organization, and she was also responsible for the conception and staging of the organization's signature star-studded community event, "Passing the Torch of Success," before being expelled.

During her testimony before a Senate Foreign Relations subcommittee about Iran's human rights crisis in May 2011, Bakhtiar stated, "Under Ayatollah Khamenei's leadership, Iran [has] become one of the worst violators of human rights in the world... egregiously violating virtually every article of the International Covenant on Civil and Political Rights, of which Iran is a member state."

The failed coup attempt in Turkey in 2016 inspired Bakhtiar to start on an unfinished documentary about the country before Michael Flynn was appointed as President Donald Trump's National Security Advisor. Although a Turkish businessman had paid the Flynn Intel Group, a lobbying organization based in the United States, more than US$500,000 for the film's production, he was convinced that no one was aware of who was behind it. She claims she was denied the opportunity to present a balanced account of the events. She fears that the documentary will demonize Fethullah Gülen, a Turkish cleric whom Turkish President Recep Tayyip Erdoan holds responsible for the coup attempt and who Erdoan wants to be extradited to Turkey from the United States. After initially claiming that she had not been contacted by anyone investigating Mr. Flynn, it was reported in November 2017 that FBI agents investigating Mr. Flynn had reached out to Bakhtiar by phone call.

On December 4, 2003, Bakhtiar served as master of ceremonies for the Iranian American Technology Council Gala in Washington, D.C.

At the University of California, Irvine, Bakhtiar acted as master of ceremonies for Shirin Ebadi, who was awarded the Nobel Peace Prize in 2005.

Bakhtiar made a report to Fox News regarding alleged sexual harassment by Brian Wilson prior to his employment as Washington bureau director.

By July 2016, Wilson had publicly refuted the charges.

The corporation claims that even if her allegations against Wilson were genuine, Fox News could not be held liable for quid pro quo sexual harassment because Wilson was not her immediate supervisor during the harassment. Following that, Fox News claimed she could not establish a connection between her complaint and the termination of her contract. At the conclusion of a confidential mediation session in 2007, during which Bakhtiar received a favorable ruling from the mediator, a settlement was reached in which Fox News agreed to pay Bakhtiar the $670,000 remaining on her contract as her legal bills. In spite of the fact that she agreed in her settlement not to speak about her time at Fox News, she chose to do so in the wake of Gretchen Carlson's sexual harassment lawsuit against longtime Fox News CEO Roger Ailes, which was filed in July 2016.

FAQ: How old is Rudi Bakhtiar?

FAQ: What is Rudi Bakhtiar networth in 2020?