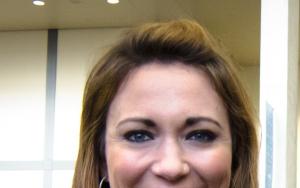 Brooke Baldwin is an American news anchor at CNN. She anchors CNN Newsroom with Brooke Baldwin. She is a charming and attractive anchor who worked in many news channels before she joined CNN. She contributed for the show Rick’s List anchored by Rick Sanchez and later on took over the anchoring job after Sanchez was fired from the show due to controversy regarding his alleged anti-Semitic remarks.

Born in 1979 in Atlanta, Georgia, Baldwin attended The Westminster Schools. As an undergraduate, she studied at the Universidad Iberoamericana in Mexico City. She later graduated from the University of North Carolina at Chapel Hill earning degrees in both Journalism and Spanish.

In July 2017, Baldwin became engaged to her long-time boyfriend James Fletcher. Fletcher is a British national who is a director and producer who has produce several advertisements for political campaigns. The couple met at a holiday part in 2015. They plan to marry in the near future.

In 2001, Baldwin began her career in journalism at the Charlottesville, VA station WVIR-TV. Her adept reporting eventually earned her the morning anchoring spot for West Virginia station WOWK-TV. There she reported on the Sago Mine collapse and Martha Stewart’s release from federal prison. Later, she became a lead reporter for WTTG in Washington, D.C. At WTTG she covered the Virginia Tech massacre.

Baldwin joined CNN in 2008 as a freelancer after completing an internship with the company. She claims she turned down a job offer from Roger Ailes at Fox News when CNN offered to make her a full-time correspondent.

Baldwin started with contributing to Rick’s List hosted by Rick Sanchez. In 2010, Sanchez was fired after criticizing Jon Stewart and expressing allegedly anti-Semitic opinions on Sirius XM’s radio show Stand Up With Pete Dominic.  A day after his remarks, on October 1, 2010, CNN announced Sanchez was no longer employed by the company. There is some speculation whether his firing was motivated by his comments or for other, internal reasons. Brook Baldwin took over the anchoring spot after Sanchez’s firing.

Baldwin has also contributed to CNN’s New Year’s Eve Live with Anderson Cooper beginning in 2010. She currently anchors the afternoon edition of CNN Newsroom from 2 to 4 p.m. She also anchors the show #MusicMonday, a weekly show named after the Twitter hashtag where she profiles different music personalities. She will be the last news anchor to host The Lead from Atlanta, before the show starts airing from Washington, D.C. She is said to earn an estimated $1.3 million salary annually.

Besides being attractive and charming, Brooke Baldwin is a highly talented personality who has carved a space of her own with her compassionate and witty performance. She believes in building trust and rapport, before starting her interviews. Her reporting style is said to mirror the golden age of CNN, and her graceful and pleasing presentations has won many hearts. She has used her media influence take on social responsibility, rather than simply presenting her shows as a series of updates. Her #wecandobetter Twitter campaign is an excellent sample of her social contribution. In this campaign, she talks about child abuse and ways to help children in need.

FAQ: How old is Brooke Baldwin?

FAQ: What is Brooke Baldwin networth in 2020?