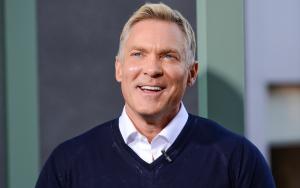 Sam Champion is known as an American weather anchor. He is most famous for his work on the ABC flagship station WABC-TV and Good Morning America.

Samuel James Champion was born on August 13, 1961, in Paducah, Kentucky. He and his sister, Teresa were raised by their parents, Sylvia and James Champion. His father, James was a brave man and served as a lieutenant colonel in Vietnam.

Samuel spent his childhood in Paducah but did not receive an education until he moved to Fairfax, Virginia where he attended Fairfax High School. In 1979, he graduated from high school and moved to Richmond, Kentucky in order to continue his studies at Eastern Kentucky University. At Eastern Kentucky University, Sam Champion studied broadcasting news. The university provided him with theoretical knowledge and also gave him a chance to intern at CBC affiliate WKYT-TV.

On October 5, 2012, Sam and his partner, Rubem Robierb announced their engagement. After two months, they got married. The wedding took place at his gorgeous penthouse in New York on December 21, 2012. The next day, their photos from the wedding were on the headlines of newspapers. Among the invited guests were Good Morning America co-hosts, Josh Elliott and Robin Roberts. For his fans that was a big surprise because it wasn't generally known that he was. A lot of his female fans were very disappointed because they thought they would be able to win his affection.

There were rumors that Sam had an affair with the baseball player, Mike Piazza. Mike officially claimed that he has never gay and did not have a close relationship with Sam Champion.

After he got his bachelor's degree in broadcasting, Sam Champion started his career in his native city of Paducah, working as a weather forecaster at NBC affiliates, WPSD-TV and WJKS. In 1988, he moved to New York City and immediately found a weather forecaster job at the flagship station of ABC, WABC-TV.

All these positions as a professional weather forecaster made him a big name and soon he got a great breakthrough in his career when he was hired as a weather forecaster on a very popular American morning show Good Morning America. Thanks to this job he got an opportunity to make incredible reports like the wildfires in California, the hurricanes in Florida, and the Polar Ice Caps. Apart from making weather forecasts, Sam Champion regularly interviewed different celebrities and newsmakers on Good Morning America.

On December 2, 2013 he retired from ABC and became a managing editor of The Weather Channel. There he appeared in shows like “America’s Morning Headquarters” and “Live! With Kelly and Michael”. He also appeared on a popular show called Larry King Live on CNN.

FAQ: How old is Sam Champion?