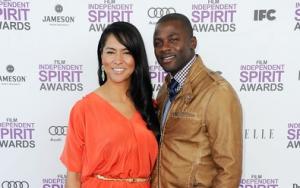 Sophia Adella has starred in several movies such as The Rally-LA (2016) as Sally, Spartan (2004) as Agent, Lying in Wait (2001) as Sylvia, and Knockout (2000/2001) as Isabelle Alvarado. She also starred as herself in Mali Music: Beautiful, directed by Joslyn Rose Lyons. Sophia Adella starred in the music video for a song called "I Want You“ by the music group Common.

Her famous husband, Derek Luke was born on April 24, 1974 in Jersey City, New Jersey. He was born to mother Marjoire Dixon, a classic pianist and to father Maurice Luke, an actor. His father left Luke and his two brothers when he was in the 3rd grade of elementary school. The cause for this to happen was a divorce. His mother struggled to make ends meet out and to feed her children off her low musician's paycheck. Luke and his family had to move a lot of times into different places where his mother would find better paying jobs. Growing up in this hard environment made Derek Luke a strong personality at a very young age.

Derek Luke attended six different high schools because he had to constantly move in and out of places with his family. He finally settled in and graduated from Henry Snyder High School in 1992, which is a performing arts school located in Jersey City. After his high school education, he enrolled at Jersey State College to study acting and pursue his acting career. After his college education, he moved to Los Angeles hoping that he would become a big and important name in Hollywood.

Sophia's husband Derek Luke has abundant experience in acting. Initially, Derek struggled to play roles in any movie or television series. He had to work at Sony Pictures gift shop so he could pay the rent for an apartment in Los Angeles. At first, he played minor and guest roles of small significance in shows like The King of Queens and Moesha. His first leading role was in Denzel Washington's 2002 film Antwone Fisher, an autobiographical film written by Antwone Fisher. For Antwone Fisher, he was awarded Independent Spirit Award. After Antwone Fisher, he starred in Glory Road (2006) and Captain America: The First Avenger (2011).