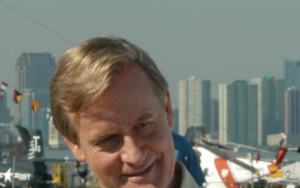 Steve Doocy is known as an American news anchor. He is most famous for hosting Fox and Friends.

Stephen James Doocy was born on October 19, 1956, in Algona, Iowa. He was born to JoAnne and James Edward Doocy. He has four sisters, Lisa, Ann, Jenny, and Cathy. Stephen Doocy spent most of his childhood in Abilene, Kansas. After completing high school, Stephen Doocy attended the University of Kansas where he graduated with a degree in Journalism. He was an active participant on campus where he was the first on-air DJ for the school radio 90.7 FM in Lawrence, Kansas.

Stephen Doocy is married to Kate Gerrity. Stephen and Gerrity met while working together in Washington, D.C. The couple spent six years dating before they married. Together Stephen and Kate have three children, Peter, Mary, and Sally Doocy. Stephen’s son Peter has followed in his father’s footsteps as a journalist and now anchors the Fox and Friends show in the morning.

Following his college education, Stephen Doocy started his career as a news reporter. He worked at various positions in Kansas City, Topeka, Wichita, and Des Moines. His early career included working as a morning newscast anchor for WCBS-TV in New York. He was also a co-host of Wake Up America on NBC and hosted the syndicated show House Party with Steve Doocy from 1989 to 1990.

FAQ: How old is Steve Doocy?