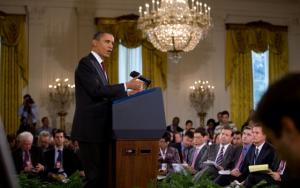 America's Newsroom's co-anchor, Ed Henry, is a Fox News Channel anchor. After serving as CNN's senior White House reporter and legislative correspondent, he joined the network in June 2011. He has won many media awards, including the Everett McKinley Dirksen Award for Distinguished Congress Reporting and the Merriman Smith Award for excellence in presidential coverage under deadline from the White House Correspondents Association in 2008. He is the author of 42 Faith, a New York Times best-seller.

Henry was born in the Astoria district of Queens, New York City, New York, on July 20, 1971, to a dairy manager father and a bookkeeper mother. He went to St. Joseph's Grammar School until the family moved to Long Island's Deer Park. Henry subsequently went to nearby West Islip's St. John the Baptist Diocesan High School. He graduated from Siena College in Loudonville, New York, with a bachelor's degree in English. He started his career working for Jack Anderson.

In June of 2010, Ed married Shirley Hung, a CNN senior producer after they got engaged four months earlier. The wedding took place at the Wynn Hotel in Las Vegas. The couple threw a party for their guests at Caesars Palace Rao's the day before the wedding ceremony. The cake prepared for the wedding had twenty-two layers of chocolate with whipped cream frosting and weighed seventy pounds. It was a replica of the White House.

Henry's wife works for Ed's network, but that has not caused any issues in their marriage. The couple does not make many appearances together in public because they want to enjoy their privacy. On May 4, 2016, Ed took a temporary leave from broadcasting, according to a Fox spokesman, due to an alleged extramarital affair with a Las Vegas hostess, Natalia Lima. She said she met Henry five years before social media. The scandal quickly died down. Henry returned to Fox three months later in August as the chief national correspondent. Ed currently resides in Chevy Chase, Maryland, and commutes to Washington, D.C. bureau for his Fox News broadcasting duties.

Start of Journalism Career with CNN

Henry started his career with the noted columnist Jack Anderson. In 2003, he started working as a political analyst on local radio shows such as the WMAL Morning News and The Chris Core Show. He soon gained recognition and respect in his journalism field, which led him to cover Capitol Hill for Roll Call for eight years.

In 2005, he served as a moderator for CNN's Inside Politics program, and in 2006, he started covering the White House. CNN gave the position to him after an unusual incident. Robert Novak stormed off the set during an on-air discussion with political commentator James Carville. Ed had to continue the show with just Carville for the remainder of the segment. In 2008, he was granted a senior position. Out of the three reporters at the White House, he was the only leading correspondent.

FAQ: How old is Ed Henry?

Quick Facts
Help us Edit this article and get a chance to win a $50 Amazon Gift card.
Last Modified: Jul 6 2021
You may also like
articles you may like