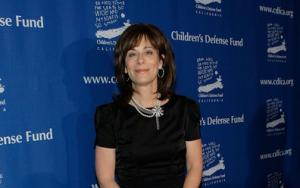 Jane Frances Kaczmarek was born on December 21, 1955, in Milwaukee, Wisconsin to Evelyn & Edward Kaczmarek. Mother Evelyn was a school teacher while Father Edward was in Department of Defense. She was raised in Greendale & went to the University of Wisconsin, Madison for her graduation in Arts & graduated in1979 with majors in Theatre. Continuing her passion for Drama & Theatre, she enrolled at the prestigious Yale University, where she was a part of the University’s theatre company.

She spent some time on television after graduating and in the late 1980s landed in Drama Series like The Paper Chase: 2nd Year & Hill Street Blues & the short-lived Equal Justice, displaying her calibre as a trained & refined actress. Her portrayal of Linda Bauer in Equal Justice brought her accolades & many TV roles. Her first Tv role was Margie Spoleto in For Lovers Only. Her noteworthy appearance in movies includes Falling In Love (1984) & The Heavenly Kid (1985).

As per her biography, Jane made numerous appearances in the 1990s owing to her rugged & refined acting prowess. She was seen in law & Order, Picket Fences, Frasier, Touched by an Angel, The Practice & Party of Five. Her roles in Cybill & Felicity helped her in bagging the lead role of Lois Wilkerson, the loving yet strict Matriarch in Malcolm in the Middle. She played the character with such élan that it made her a household name. For her portrayal of Lois, Jane has earned 7 Emmy Nominations, 3 Golden Globe Nominations, 2 Actors Guild Award Nominations, 2 TV Critics’ Association Awards & the American Comedy Award & Family Television Award. In 1998, Jane was seen in the movie, Pleasantville as Toby Maguire's mother with Reese Witherspoon.

She has several broadway & theater successes which include Lost in Yonkers & Raised in Captivity which earned her the coveted L.A. Drama Critics Circle Award. She was seen & is currently making appearances on many TV Shows. Her remarkable performances are Voicing Judge Constance Harm in Simpsons, Wilfred, Whitney, Good People, The Middle, Law & Order: Special Victims Unit, Lost On Purpose, Raising The Bar & The Comeback. Her movie appearances included Wildly Available & The Chamber.

Jane, owing to chronic arthritis had a hip replacement surgery in April 2004, from which she quickly recovered. Jane was married to grad-fellow Bradley Whitford after another grad-fellow, Kate Burton set them up on a blind date. They had 3 children out of the wedlock, Frances, George and Mary Louisa. The couple was socially active & seen together in a lot of charities. However, the couple eventually split & took divorce in 2009, after being together for 17 years. Jane & Whitford cofounded Clothes Off Our Back, a foundation to benefit Children’s charities by auctioning Celebrity Apparels. Jane also penned an afterword for Together, a book for children by Erik per Sullivan, a co-star from Malcolm in the Middle. The book addresses the importance of domestic animals & the issue of world hunger. In 2009, she competed & won against Robin Quivers & Julie Bowens in Jeopardy! Million Dollar Celebrity winning $50,000 for her foundation Clothes Off Our Back.

Her net worth is pegged at $9Million with her Tv roles & movie appearances.

FAQ: How old is Jane Kaczmarek?