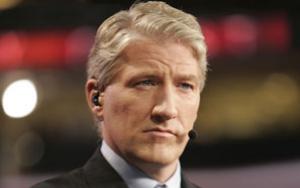 John King is known as an Irish American journalist. He is most famous for being the chief national correspondent at CNN.

John King was born on August 30, 1963. He completed a bachelor’s degree in journalism and an honorary doctorate when he graduated from the University of Rhode Island.

John King married a fellow reporter on CNN named Dana Bash. They got married in 2008 but following four years of marriage, the couple separated from each other. They had a child together in June 2011. The child was not even a year old before they chose to throw in the towel. Out of appreciation for John's mom, Joan and Dana's grandfather, Frank Weinman, the kid was named Jonah Frank. They are proceeding to co-parent their child despite the fact that they are not married anymore. Not long after the separation, bits of gossip spread that he was taking part in extramarital relations with a reporter at CNN.

In 1991, John King won the top reporting prize from the Associated Press Managing Editors Association. He was awarded for his exclusive coverage in Kuwait during the Gulf War. In 1997, he joined CNN and served in the position of senior correspondent for the White House from 1999 to 2005. In 2005, John King was officially named a national correspondent at CNN. He also appeared in news programs called Anderson Cooper 360 and The Situation Room.

During the 2008 presidential elections, John King anchored and reported a 90 minute documentary on Senator John McCain who was a presidential candidate. John King also covered the presidential campaign and debates in 2012. He was tasked to moderate the 2012 CNN Republican President Debate which was held in New Hampshire. During coverage of political elections, John King uses the multi-touch collaboration wall which is used to display and manipulate the maps and graphics of election results. King was the one to break the story of General Colin Powell’s decision on not contesting for the role president.

On May 2, 2011, King was the person to confirm the death of Osama Bin Laden on the CNN network. King in his career has reported from all the 50 states of the U.S and from international locations also. He has conducted interviews with first lady Laura Bush, George Bush, President Barack Obama, and various other senior officials. John was also the anchor assigned to report on the State of the Union.

Apart from his coverage in the United States, he has covered some international events like the Persian Gulf War and the U.S military operation to restore the Aristide governance to Haiti. He also covered the inauguration of Nelson Mandela as the president of South Africa. John King has traveled to Thailand, Indonesia, and other South Asian countries. He stayed in this region to cover the tsunami disaster and its aftermath/ The disaster took away 175,000 lives. In the year 2006, John King accompanied President Bush on his trip to Baghdad. During this trip, he met the then Iraqi Prime Minister, Nouri al-Maliki.