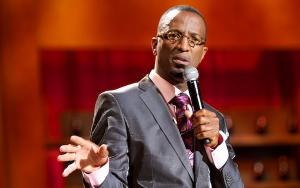 Rickey Smiley is known as an American comedian, actor, radio personality, and activist. He is most famous for the Rickey Smiley Morning Show.

Rickey Smiley was born on August 10, 1968, in Birmingham, Alabama. After his father’s untimely death when Rickey was six years old, he faced a lot of hardships. His mother could not raise him alone and therefore leaned on her parents to help. Rickey was brought up by his grandparents and he encountered many difficulties in his younger days. In spite of these difficulties, however, he has always said that his childhood was a lot of fun. Being surrounded by so many different family members and a strong sense of Southern culture has been a great inspiration for his comedy, political viewpoints, and social activism.

Rickey graduated from Woodlawn High School and then attended Tuskegee University for a brief period of time. He eventually received a Bachelor’s Degree in English from Alabama State University in 1992. To this day, he remains a member of the Omega Psi Phi Fraternity and Kappa Kappa Psi National Honorary Band Fraternity.

Rickey has two biological children though nothing is publicly known about his relationships and he is simply described as a single father. Besides his biological children, he is also known for raising eight adopted children, including some of his nieces and nephews. The hardship of losing his father at such an early age has been a large motivator for opening his home and providing care to so many children. He loves spending time with all of his kids, taking them boating and fishing whenever he can.

He denied the rumors that he was dating radio co-star Claudia Jordan. Rickey has stated: “If I ever get married again, it will be to somebody who can hold an intelligent conversation.” He's also said that his ideal woman would read books, know who represents them in Congress, and can teach him something.

From early childhood, Rickey Smiley displayed his comedic talents at home among his family members. He took the stage in front of a live audience for the first time at a Comedy Club in Birmingham, Alabama.

Smiley has mentioned in one of his interviews with BET.com that it was on the 13th of November, 1989 that his comedy career began to take shape. Aside from giving his own hometown fits of laughter, he began touring with talents like jazz singer Will Downing, comedian George Wallace, and gospel singer Dottie Peoples.

With his opportunities expanding in the 90s, he began to appear in TV specials like Def Comedy Jam, Showtime at the Apollo, and Snaps, an HBO feature. In 2002, he starred in the classic comedy film, Friday After Next, alongside famous rapper and celebrity personality, Ice Cube. He hosted another comedy show, The Way We Do It, on BET and won BET's Platinum Mic Viewer’s Choice Award in 2004.

Since those days of performing at small venues in Alabama, Rickey has produced six comedy CDs, appeared in numerous movies and television shows, and has achieved a net worth of 2.5 million dollars.

Rickey’s comedy shows are big hits and he has been hailed as “one of the funniest people in America.” Smiley is a clean comedian who does not use sexual innuendo or profanity in his shows and his act is appealing to audiences of all ages. Further demonstrating his ability to be funny without profanity, Rickey collaborated with famous comedian, Steve Harvey, to construct acts designed specifically for churchgoers.

As a multi-faceted performer, Rickey not only tells jokes but also plays multiple instruments and sings. Rickey even plays the piano and organ at his church. He has said about his comedy passion, “I love what I do and enjoy getting up every day with the expressed purpose of bringing joy into the lives of others through laughter. The greatest satisfaction I can receive is knowing that my talents are a form of escapism that brings happiness into so many deserving lives. To be blessed with sold out tours, a successful radio show and two Television platforms, is more than I could ever have dreamed and I am committed to working harder than ever to continue to be a positive influence and all around best entertainer I can be.”

FAQ: How old is Rickey Smiley?

FAQ: What is Rickey Smiley networth in 2020?