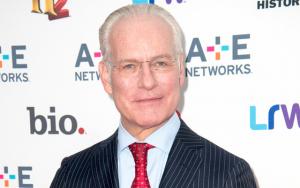 Tim Gunn whose birth name is Timothy MacKenzie Gunn was born in the on the 29th of July in the year 1953. He is a chief creative officer, television personality and fashion consultant. His mother’s name was Nancy while his father’s name was George William Gunn.

Gunn was a very good swimmer while he was in high school he got his sculpture BFA from the Corcoran College of Art and Design.

In the year 1982,Parsons employed Tim Gunn. He rose to become an associate dean in the organization in the year 1989. He served in this capacity until the year 2000 when he became the chairman. While working here he got the credit of invigorating and retooling the curriculum to suit the 21st century.

In the year 2004, he started featuring on Project Runway and had the reputation of always using Make it work as his catchphrase. In the year 2013, he was given an award by Princetime Emmy as an Outstanding Host for a Reality Competition or Reality Program. Guide to Style by Tim Gunn, which is a reality tv show was premiered on in the year 2007 in the month of September. On this show, he gives guidance to individuals who have a problem with fashion. The show is hosted by the Bravo television network.

He also acted as himself in 2 episodes of Ugly Betty which was aired in 2007. In the year 2009, he also featured as a guest on Drop Dead Diva.

In the year 2007, he resigned from Parsons and started working as the chief creative officer of Liz Claiborne Inc. In the same year, he launched his “A Guide to Quality, Taste and Style” book which was published by Abrams images and co-authored by Kate Molony. He was honored by Palm Desert city as the 27th of April in the year 2007 was named after him. He also got a Palm Springs city certificate and a Rancho Mirage city plaque in honor of his successful career.

He also worked at the Corcoran College of Art and Design as a starting speaker in the year 2009. The institution also presented him an honorary doctorate degree. He has featured occasionally in The Late Show with Craig Ferguson where he stands in for or helps Ferguson in dispensing advice and answering letters.

He has also featured as a guest on many episodes of How I Met Your Mother where he acts the role of the personal tailor of Barney and some movies. He also featured in Gossip Girl’s Season 4, where he acted as himself.

Tim Gunn resides in the city of Manhattan. He has not dated anybody since 1985 as he has been staying celibate. He hid his gay status from his family for a very long time before opening up to his sister when he was almost 30 years old.

He has also openly criticized the use of animal furs for clothing designs. He was quoted to have termed as egregiously irresponsible, the animal’s (whose fur are used for designs) treatments. He endorsed the candidacy of Christine Quinn in the year 2013 for the city of New York’s Mayor. Tim Gunn’s biography would not be complete without mentioning that he has a blog and a podcast. He is estimated to have a net worth $15 million.

FAQ: How old is Tim Gunn?